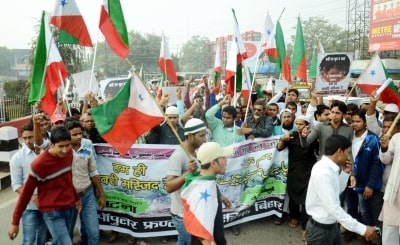 The National Investigation Agency (NIA) — which was probing over 100 (Popular Front of India (PFI) members in connection with various cases — arrested 45 members in raids across the country on September 22. The PFI was under the watch of the central security agencies since long as its cadres were deeply involved in indoctrinating young Muslims and receiving funds from foreign-based entities for waging war within India.

Local police forces and the Enforcement Directorate (ED) are also probing allegations against the PFI of ‘funding’ the 2019 anti-CAA protests and the 2020 northeast Delhi riots. Additional charges are terror funding and helping illegal Rohingyas and Bangladeshi migrants to sneak into India. Its footprints can be found in the pan-India protests against the National Register Census (NRC) and Citizenship Amendment Act (CAA) as well as the hijab row in Karnataka.

There is a lot of evidence that the PFI has roots in the banned SIMI (Students’ Islamic Movement of India) with many other organisations associated with it in various programmes, such as the Huda Islamic Center, Amity Peace Foundation, Jamaat-e-IslamiHind, Indian Pravasi Council (Oman), etc.

Many political parties too have been alleged to be associated with the PFI — Milli Etihad Parishad (West Bengal), AMMK Party (Tamil Nadu), CPM (Kerala), Ambedkarite Party of India (Rajasthan) and so on. The Uttar Pradesh Police, which is investigating over 19 cases against the PFI members filed in connection with the unrest reported in the aftermath of the Hathras case in September 2020, has accused the PFI of “sedition, conspiracy, disturbing peace and promoting religious hatred”.

Since its creation in 2006 post-Babri-Masjid demolition, with the merger of three Muslim interest groups, PFI’s presence has stretched to 23 states, according to the NIA. It identifies itself as a “neo-social movement” with a vision to empower all marginalised sections in India. Several of its co-founders were originally SIMI cadres, hence the connection. E. Aboobacker, president of PFI’s political wing Social Democratic Party of India (SDPI), headed the SIMI’s Kerala unit from 1982 to 1984, while Professor P. Koya, a member of the PFI’s national executive, was a founding member of both SIMI and the NDF. PFI vice-chairman E.M. Abdul Rahiman was a SIMI general secretary between 1982 and 1993.

Yet the members refute the connection to SIMI arguing that the banned outfit’s solution for the Indian Muslim community’s problems against “the rising tide of Hindutva” was Islam only whereas PFI believes India is a pluralistic country with many religions. This is seen by many Muslims simply as changing colours to lie low and out of the government’s and security agencies’ eyes. It even has a general secretary by the name of Mohammad Ali Jinnah, who refutes the ED’s (Enforcement Directorate) claims that the PFI had funded the agitation against the CAA in various parts of the country.

The charge sheet has a long list — contact with Jawaharlal Nehru University (JNU) scholar Umar Khalid; providing funds to suspended Aam Aadmi Party (AAP) councillor Tahir Hussain – under arrest for his alleged role in the Delhi riots; link to the Tablighi Jamaat – the Islamic organisation which faced criticism for holding a religious congregation at Delhi’s Nizamuddin Markaz during the peak of the first wave of Covid infections; 2019 Mangaluru violence in which two people were killed in anti-CAA protests; gold smuggling through diplomatic baggage addressed to the UAE consulate-general in Thiruvananthapuram; carrying out “forced conversions” in Kerala’s Malappuram; organising a terror camp in Kannur in 2013; running institutes where young people are indoctrinated; recovery of bombs, IEDs and swords from the same camp; and the most heinous of all the chopping off of a Professor T.J. Joseph’s palm in Kerala’s Idduki on false charges of blasphemy; plus the murders of various RSS and ABVP workers in South India.

Despite refuting all of the above charges, Ahmed Shareef, the founder member of PFI said in its mouthpiece ‘Gulf Thejas’, “After making India an Islamic state, the PFI will go to other countries.”

It is clear that India has an internal insurgency going on for several decades and that various Middle Eastern Wahhabi-inspired nations are willing to fund this insurgency. The coming weeks should reveal more about this.