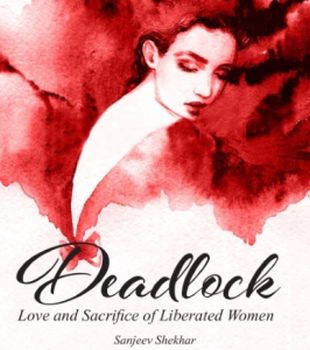 We often talk about women independence, empowerment, liberty and rights. This has always been a debated topic across the globe. But are the dominant men willing to accept the freedom of women? The question remains with contradictions and paradoxes till today

It’s a daring romantic novel probing the post-marital love-lust relationship of a man and woman, talks about woman decision, her sacrifices thought and their independence to create their own identity for bliss in life.

The author here has attempted to delve on the issues that has always gripped the women folk vis-à-vis their independence, empowerment, liberty, sensuality, sex and rights in their personal life. This is the age of live-in relationship, one-night stand and the trends that have emerged manifesting the change in relationship status of a man and a woman. We tend to forget that women are also individuals, who have the right to think and do things as per their wish. The creation of God is such that they are more sensitive to surroundings and happenings around them. They are more conscious and alert, have the inherent sense of building home to society they live in.

From the beginning of their life, they are made to realize they are weak. Hardly inspirational stories about independent women are shared with the generations. They are expected to obey the man-made rules leading to missing of fun in their life. They are made to follow and believe the unwritten rules and laws under the garb of religiosity, mythological stories and hidden wishes of man.

This book entails the real-life story of such independent women who have their own thought pattern and are unwilling to compromise or go by the ‘rule book’ of the society. The heroine Misha has her infatuation and love for men and she wants to live with it in her own way, thereby believing in herself. She does things at her inner call without feeling guilty and indulging in sexual aspirations she wanted to fulfill on her own…she is brainy, beautiful, self-dependent and financially well equipped to lead her life on her terms.

Her friends too have their lifestyle and do not want much of an interference in their thought box, as nothing is defined as do’s and dont’s in the society about leading lives. If a woman does not fit in the frame of mind of a man then she is a waste, sinful and what not?

The mother stands by her daughter. She is there to protect her dignity and does not allow her to go in a state of depression. The mother is well aware of the society’s thought pattern where women who lose their virginity before marriage are always looked upon as a subject of scornfulness. She is there to fight out this menace silently and takes a stand to justify that lovemaking is just like a fit of moment where any individual can get carried away at the young age. Mishap happens in life, but one has to come out of it, instead of carrying the trauma for the rest of life.

The author discusses the life of Siddhi and Vinayak, altogether the different thought pattern that comes alive in the form of family drama in the later stage. Siddhi goes out of way to fulfill the desires of her sister and family, and seeks support from her husband to cure her ailing sister. She gives birth to the baby to fulfill the desire of the sister. And the story moves on in a positive direction, thereby symbolizing the sacrifice Siddhi makes for her sister’s happiness. It’s the call taken by woman, Siddhi.

The novel triggers several questions in the mind of conscious people of the society regarding existence of women equality, where women are seen as substance, be it whatever class or segment. The ‘unethical’ relationship of man-woman raises question on the ‘man dominated ethical system’. Do the woman have the right to fall in love at any stage of life, as like in this story the heroine Misha falls in love when she attains the age of 40 with her childhood friend Shivraj, who too is almost of her age. Both are hiding their love-lust from their respective spouses. Who is right in their spirit? Both are sailing in the same boat. The question lingers, whether this love is justifiable, as this happens in quite a few places and pervades the domain and mind of both men and women.

If a woman is single after divorce, separation or any other related issue, she is seen as ‘granted commodity’ or whore but the actual serenity of her behaviour towards discharging the responsibility to lead a good family life with her kid or parents and fulfilling their need is simply ignored by the society? Her earning goes unnoticed many a times. Why is she not marrying again? C’mon, who will marry her? She already bears the child from her first husband? She is dangerous, as she had sent her first partner to jail?

Are we looking on the other side of the life, i.e from the man’s perspective? Oh..Oh.. she is gorgeous and sexy, if only she sleeps with me once, the common refrain of man’s psychology looms large without spelling out explicitly.  People are after woman’s life and try to take ‘theka’ of their character? The moral policing stands only to scrutinize the woman’s character, no matter if she is self-sustaining and independent in the society. The woman without a partner in the society like ours can be nothing but a ‘property’. Such audacity of pervert thoughts towards the fairer sex is common by none other than the ‘powerful men’ of the society, who also takes the ‘theka’ to protect the woman, without taking into account that he is actually the main threat to her dignity and modesty, if rogue enters his mind.

The woman is subdued in her choice but she too thinks independently. This novel tries to reveal the independent thought pattern of women by their deed and express it all vis-a-vis the man-made principles and ideologies wherein the woman tries to defy and takes on the believe, “If you obey all the rules, you’ll miss all the fun.”

The novel overall is getting good feedback and grabbing good rating online.