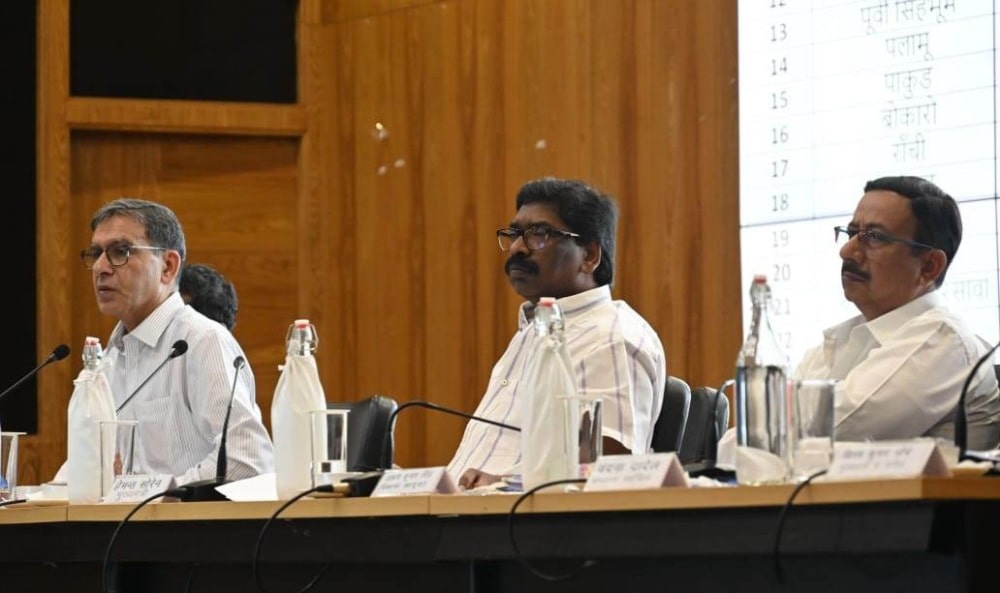 Ranchi: Jharkhand Chief Minister Hemant Soren held a series of back-to-back meetings with several departments on Monday and gave out instructions including the execution of the job reservation scheme for locals in the private sector from next month. The Chief Minister asked the officials to implement the job reservation scheme that provides for 75 per cent reservation to locals in jobs with monthly salaries up to Rs 40,000 in the private sector from next month.

The bill was passed by the state assembly early this month. While reviewing the labour, employment, training and skill development department he also instructed to prepare a fund of Rs 10 lakh to provide financial assistance up to Rs 50,000 in case of accidental death of migrant workers. He asked to get the ITI buildings vacated where the CRPF or the IRB is staying and asked to make alternative arrangements for them.

He instructed the deputy commissioners of all 24 districts who were present in the meeting to allocate 60 acres to 100 acres of land to set up 20-megawatt solar power plants in each district. The Chief Minister also said he wants wide publicity for the scheme of free five units of electricity each month for those planting one tree.

He said that there is a drought-like situation this year due to less rainfall and so officials should take special care in creating more jobs by implementing the schemes on a large scale so that there should be no forced migration of farmers and labourers. He also gave instructions to complete the pending schemes by November 15.

The Chief Minister instructed them to start at least five new schemes in every village without delay. In the rural job scheme Mnrega, he instructed to give priority to SC/ ST, ensure 50 percent women participation, remove fake muster rolls, pay wages on time, and create more man days. Over the functioning of the revenue and land reforms department, he asked the department to take concrete steps to conduct the land survey in Jharkhand.

He warned that due to the non-survey of land, people’s problems will increase with many disputes in the coming days. He said that deputy commissioners and other officers should settle the land-related cases by holding regular courts. The cases executed in the revenue courts would be reviewed after three months. The security of the documents uploaded on the website of the department
should be ensured, he added.

In the review meeting of the energy department, apart from the solar power plant and five units of free electricity, Soren asked to assess how much electricity is being sold from which feeder in the state and how much revenue is coming. Over the food, public distribution and consumer affairs department, he was informed that this year the target of producing paddy was 8 lakh metric tonnes due to less rainfall.

He instructed them to run an awareness campaign so that the farmers register themselves. He asked the officials to ensure the availability of land for the construction of 1,000 metric ton capacity godown by October this year. He also gave a directive to lift 100 percent food grains by October 30 this year and ensure its distribution.