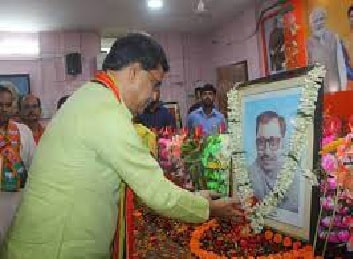 Ranchi: The BJP celebrated the birth anniversary of Pandit Deendayal Upadhyay in the entire state and paid tributes to him. The party celebrated this program at the booth level in all the 27 organizational districts of the state. State BJP President and MP Deepak Prakash paid floral tributes at his statue in Deendayal Nagar. After this everyone listened to the Prime Minister’s Mann Ki Baat. State officials, public representatives and party workers listened to the Prime Minister’s Mann Ki Baat at 24,963 places in the state.

On this occasion, Deepak Prakash said that Pandit Deendayal Upadhyay was a great man who gave a practical thought between communism,  capitalism and socialism which is integral to humanism. He said that in Integral Humanism the welfare of the entire humanity is included and in this there is not only concern for the physical development of man but the thinking of all-round development with the mind, intellect and soul.

He said that today the rest of the world’s ideologies are proving to be useless and the world is looking for solutions to all the problems in the integrated human philosophy. At the same time, BJP Legislature Party leader Babulal Marandi, while addressing the workers at the booth in Dhanwar, said that the BJP government under the leadership of Prime Minister Narendra Modi is realizing the Antyodaya idea of Pandit Deendayal Upadhyay.

He said that bringing the thoughts and thoughts of great men to the ground is the only true tribute to them. He said that whether it is Jan Dhan account, housing scheme, construction of toilets, Pradhan Mantri Garib Kalyan Yojana, Kisan Samman Nidhi, Atal Pension Yojana, all have the thoughts of Deendayal Upadhyay’s Antyodaya. India cannot be made by world leader by following the path of family politics, dynasty rather, villages, poor, farmers, dalits, deprived all can be built only by taking them forward and taking them forward. The leader said that BJP is determined for this purpose.

On the other hand, in Khunti’s Torpa, State Organization General Secretary Karamveer Singh said that India has a strong cultural heritage of thousands of years old which was tried to be hurt by the invaders in thousand years of slavery. In the thinking of Pandit Deendayal Upadhyay, the development of independent India was to be imagined on the foundation of its identity, culture and heritage he said adding that no nation can progress by suppressing its identity. India’s cultural pride is being glorified again under the leadership of Prime Minister Narendra Modi and Deendayal Upadhyay’s dreams are coming true today, he said.