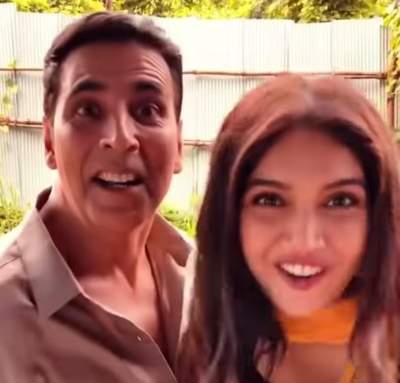 Mumbai (IANS) Bhumi Pednekar feels her teaming with Akshay Kumar gives out the vibe to fans that there is meaningful entertainment in store.

Bhumi and Akshay have earlier worked in “Toilet: Ek Prem Katha” and are currently working on the upcoming film “Raksha Bandhan”.

“The fact that we come from a film that really worked, was loved and had such an important social message that people have similar expectations from our current collaboration as well. But I feel Akshay sir and I have feel-good value and people know if we are coming then it will be something meaningful and yet entertaining,” says Bhumi.

“Akshay sir is someone I really admire and he is someone who has really worked his way up and there are aspects of his journey I admire — like he dreamt big and achieved it, and so did I. I think the success story is something that also works for people and is inspirational for people,” she adds.

Bhumi also has projects like “Badhaai Do” and “Mr Lele” lined up. She feels she became an actress at the right time.

“I think I became an actor at a time when content started overpowering all other aspects of cinema. I realised that the language of cinema was changing and I feel very fortunate to be an active part of the change,” she says.

“I think the basic mould of how an actor is, has changed and I got a big opportunity to do that through the characters I played,” she says.

“The relatability of the girl next door where people felt the stories were their own, where people saw me play characters that they could relate with. I think that is something that worked with me,” feels Bhumi.

“The fact that when they saw me and said they know this girl and that could be their daughter, their niece, their nephew, girlfriend, wife, or sister. I think that is one of the biggest things that has worked for me so far,” she sums up.