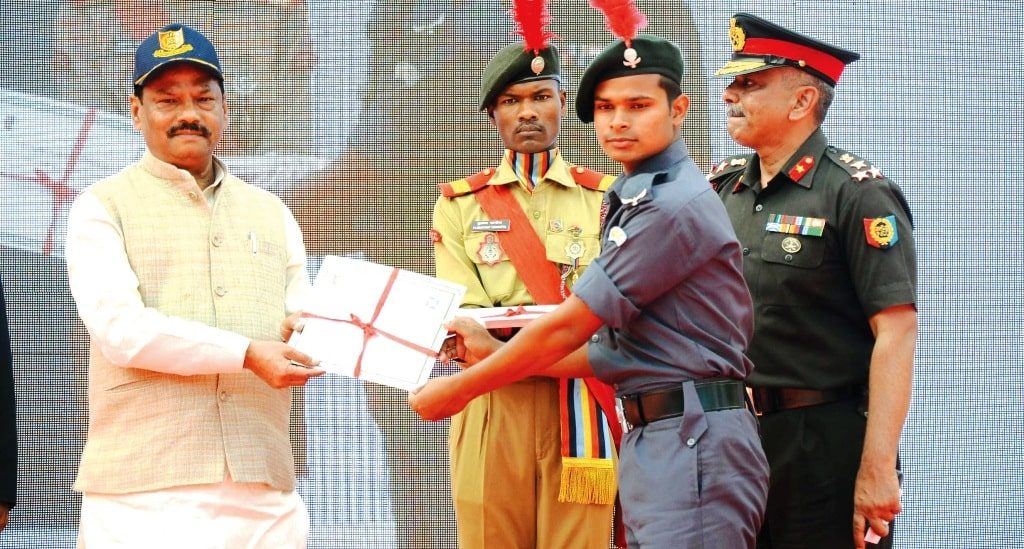 Ranchi (By our correspondent): Jharkhand Chief Minister Raghubar Das said that NCC which inculcates the feeling of nationalism among us has a very important role to play in building a new nation and also inspires the people to understand their duties and responsibilities towards the nation. Addressing a programme organized on the occasion of the NCC Diwas at the Audrey House here he said that since the year 1948 NCC has been playing very important roles for the nations, state and society.

He said that in building the new nation after the army the NCC was standing in the second row with dedication and was also doing many social and cultural works in the state. He said that NCC was also working to create awareness regarding the various programmes of the state government including the Swach Bharat Abhiyaan. Mr. Das pointed that 80 percent of diseases are spread due to unhygienic conditions and keeping that in mind Prime Minister Narendra Modi has started the Swach Bharat Abhiyaan and building the Swach Bharat in the year 2019 is a responsibility of all as dedicating a clean India to Mahatma Gandhi on the occasion of his 150th birth anniversary would be a true tribute towards him.

Mr. Das said that under the Swach Bharat Abhiyaan in every home toilet has been built in the state and now it is important that these toilets are used and asked the NCC to create awareness among the people in the villages to use the toilets. Mr. Das said that he too has been part of NCC and it is a matter of great pride socially and said that in modern times technology should be used for the betterment of state and society.

Mr. Das said that a lot of children from Jharkhand prepare to get into the army and asked the people to have a feeling of respect in their hearts towards the army men who despite odd circumstances work day and night to safeguard our borders. He also highlighted the importance of youth in making a developed and prosperous nation. He said that the state government will look into to provide reservation to NCC cadets in government jobs.

Mr. Das said that dance and music were an identity of the state and events like these help to preserve the culture. On the occasion, the Chief Minister also felicitated the best performing cadets of army, navy and airforce wing of the NCC. Those present on the occasion included Brigadier S K Prasad, Lt Gen (Retd) Gyan Bhushan. VC of Shyama Prasad Mukherjee S N Mukherjee and others.