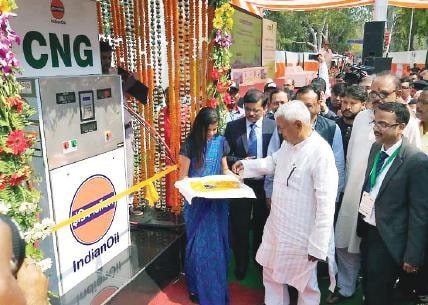 Bokaro: The state’s first CNG station was inaugurated at Naya Mode of Bokaro Steel City which has been started under the city gas
distribution scheme. The CNG Station was jointly inaugurated by Dhanbad MP PN Singh and Bokaro MLA Biranchi Narayan. On the occasion, the regional officials of the Indian Oil were also present.

CNG is 60 pc less costly than petrol and 40 pc less costly than diesel and also helps to keep the pollution in check. Officials said that
in the first phase 590 CNG stations would be launched which would be located on the national highways and other prominent roads of
the state. Indian oil has been authorised for domestic, commercial and industrial gas supply via PNG and CNG mode in Bokaro-
Hazaribagh-Ramgarh area.