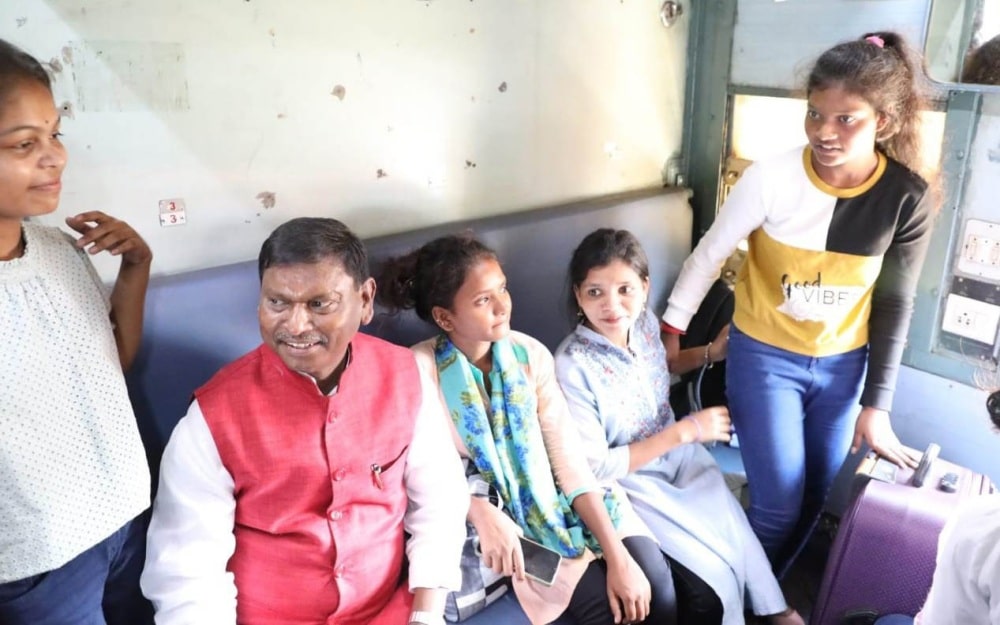 Ranchi: Union Tribal Affairs Minister Arjun Munda flagged off a special train number-08633 for Hosur (Tamil Nadu) from Hatia Railway Station on Tuesday. This special train carried the first batch of 822 girls out of a total of 1898 selected candidates in a recruitment drive organized by Tata Electronics Limited, a Tata group company, in four districts of Jharkhand – Khunti, Saraikela, Chaibasa and Simdega.

Addressing a function organized in the waiting room of Hatia station on this occasion, Union Minister Arjun Munda said that the future of the whole of India would be bright if the women of the tribal areas would get employment. He said that new employment opportunities are waiting for them thanks to the efforts of the Ministry of Tribal Affairs. This effort is also a link in Prime Minister Narendra Modi’s vision of a prosperous India.

Munda said that today the nation is celebrating Seva Pakhwada. On this occasion, he would like to say that along with Beti Bachao, Beti Padhao, give them equal opportunities. All those selected in the employment recruitment drive will be able to get further higher education along with learning-earning.

He said adding that today the women of the country are not behind in any field, be it innovation or manufacturing, they are ahead in all and all should ensure their role in nation building. He appealed to all the selected candidates that they should become skilled after getting training from there and give opportunities to the talents here by building such Hosur-like campus in Jharkhand.

He assured the parents of the girls that they should not worry about their daughters, their facilities will be taken care of there. Now he was also the guardian of these girls, soon he will go to Hosur to meet them. Earlier Naval Jeet Kapoor, Joint Secretary, Ministry of Tribal Affairs gave detailed information about the work being done by the Ministry of Tribal Affairs for the upliftment of the tribal community and the employment recruitment drive completed in four districts of Jharkhand.

Tata Electronics had recently conducted interviews of Inter Passed girl students by setting up camps in Khunti, Simdega, Chaibasa and Saraikela. Thousands of girl students participated in the camp. Out of which the first batch of selected girl students left Hosur on Tuesday by special train.