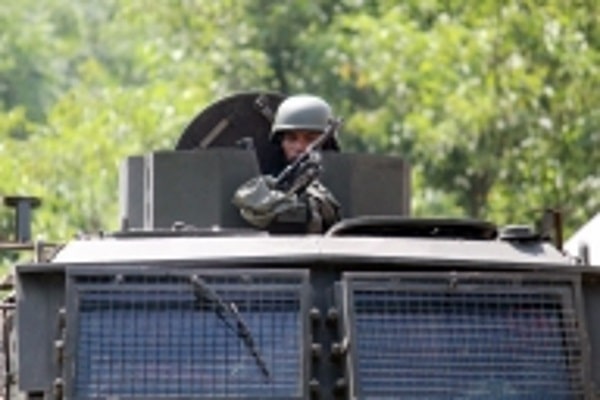 Srinagar, Marh (IANS) Two militants, five security men and a civilian were killed in the 48-hour-long gunfight that ended on Sunday in Jammu and Kashmir’s Kupwara border district.

Police said two militants were killed today in this encounter which started on Friday.

Three CRPF troopers, including an inspector, two local policemen and a civilian were killed during the 48-hour encounter in Babagund village of Handwara in Kupwara district.

Paracommandos of the Army were called out on Saturday to help other security forces carry on with the operation.

Security forces had started a cordon-and-search operation in Babagund village of Handwara area following information about the presence of militants there.

On Friday, security forces were carrying out searches after firing exchanges had stopped at the encounter site when a militant, presumed to be dead, rose from the debris of a blasted house and fired indiscriminately at security forces.

“Fatalities and injuries to security men were caused in this incident. While two CRPF troopers and two policemen were killed on Friday, an injured CRPF trooper succumbed to his injuries in the hospital today,” police said.

“A civilian was killed on Friday in clashes between the security forces and protesters when protesters tried to disrupt the operation,” the police added.

Bodies of both the terrorists were recovered from the site of encounter. Their identities and affiliations are being ascertained, sources said.

“This operation posed considerable difficulties to the security forces due to the topography of the area. The place where the terrorists were hiding was very congested and civilians in the adjoining houses had to be evacuated to safer places,” police said.

“Incriminating material and arms and ammunition were recovered from the site of the encounter. The police have registered a case and the incriminating material retrieved from the site of the encounter have been taken in the case records for further investigation and to probe their complicity in other terror cases,” police said.

Residents living near the encounter site have been repeatedly told to stay away as such an area can be dangerous due to the presence of stray explosive material.

“People are requested to cooperate with the police till the area is completely sanitized and cleared of all the explosives material, if any,” police said.