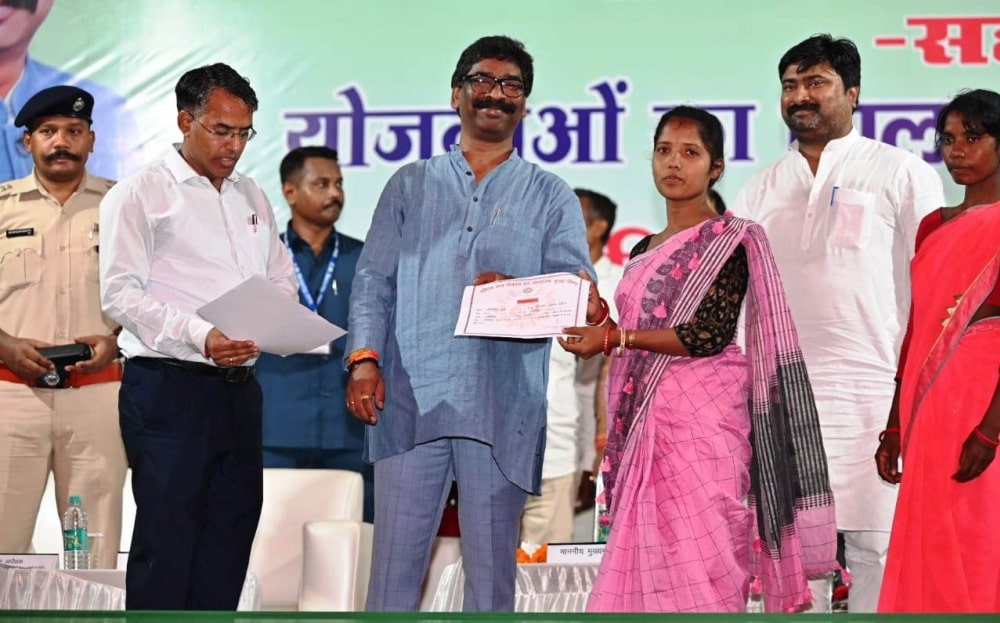 Godda: Chief Minister Hemant Soren on Tuesday exuded confidence that the manner in which the state government won the war against Corona similarly it will come out victorious in its battle against the looming drought in the state.

Addressing the Vikas Mela-cum-Janata Darbar organized at Dumaria in Boarijor block of Godda district he said that the government is concerned about the happiness and misery of every person in the state and will stand with the people at all times. He said that solving the problems of the people is one of the top priorities of the government.

He said that after the formation of a separate state it is his government which is working to speed up development by taking the state out of the confusion of the problems prevailing for the last 20 years. He said that the benefits of welfare schemes should reach to the poor and needy and it should be ensured at any cost.

The Chief Minister said that for the last two years there was a war with Corona and the government was successful in this but now due to less rain drought-like conditions are being created In the state and in such a situation the government has also started preparations for the war against drought.

Hemant Soren said that a large population of the state lives in villages therefore in such a situation he is working to strengthen the rural economy. Most of the schemes of the government have been made keeping in mind the interest of the villagers he said adding that in this regard there is a clear instruction to the government officials that if any person comes to take advantage of the scheme then by showing sympathy and seriousness towards them benefits of the scheme should be given so that people’s faith in the system is strengthened.

He warned that action will be taken against the officials who are negligent in this regard. The Chief Minister said that even after the formation of a separate state Jharkhand is counted among the backward state which is because of the problems prevailing here during the last 20 years. The development had been left on the sidelines by the previous governments but his government is working to implement many schemes faster and is making such an action plan through which the people here get their rights with respect and dignity and the pace of development can be accelerated in the state.

The demand for compensatory leave of policemen has also been agreed he said adding that the state cabinet has also decided to give Khatiyaan-based local policy in 1932 and 27 percent reservation for OBCs. He said that the government is concerned about the poor and needy and in such a situation most of the schemes are being made keeping in mind their interest.

The Chief Minister said that his government is ensuring that pension is given to all the elderly, widows, disabled, abandoned and single women. Dhoti-sari-lungi is being given to the poor for Rs 10 and apart from this new green ration cards are being issued so that they can give food grains to the poor. Apart from this, there are many such schemes through which the work of providing relief to the poor and needy is being done.

He said that the government is serious about promoting employment and self-employment in the state and very soon the recruitment process is going to start on the post of 50 thousand teachers he said adding that the process has been started to fill the vacant posts in various departments through JPSC and JSSC whereas, under the Chief Minister’s Employment Generation Scheme, the government is giving grant-based loans for self-employment. The youth should take advantage of this and give employment to others along with themselves he added.

During the function, the Chief Minister inaugurated 15 schemes costing Rs.2734.54 lakh. At the same time, the foundation stone of 40 schemes was laid and a sum of Rs 18020.05 lakh will be spent on these schemes. He also distributed assets worth Rs 2701.65 lakh among 5625 beneficiaries. Under this, a cheque of Rs 178.5 lakh was handed over to 3560 Sakhi Mandals under Community Investment Fund.

On this occasion MP Vijay Hansda, MLA Deepika Pandey and President and Vice President of Zilla Parishad and many officers including Deputy Commissioner of Godda were present.