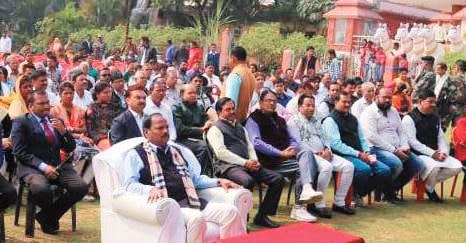 Speaking on the occasion the Chief Minister said that through his programme the Prime Minister was trying to apprise the people regarding the good works which were happening in the area of education social welfare health and spirituality and was also trying to link the people. He said that Mr Modi was the first Prime Minister who has bonded with the hearts of the people.

The Chief Minister has expressed his satisfaction after selection of Jamshedpur Kendriya Vidyalaya student Ishika Sahu a student of class 10th and SKPS School 9th students Ayush Jha who have been selected to participate in Praiksha Pe Charcha programme. Mr. Das who felicitated the students said that he hoped that the youth of the state become multi talented and should work for the betterment of the nation. He said that the Prime Minister has himself initiated Pariksha Pe Charcha programme through which the children get an opportunity to directly link with the Prime Minister and ask their queries directly with him which is a very big initiative.