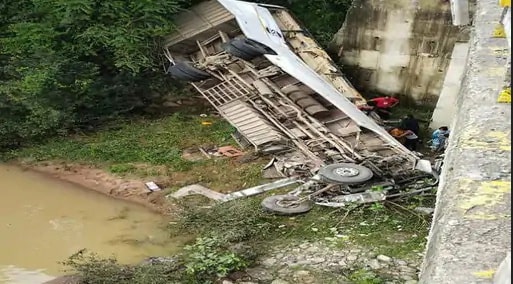 Hazaribagh: Eight people including four women and an equal number of men lost their lives and more than a dozen were injured as a bus fell from a bridge and went into a river on the NH-100 under Tatijharia Police Station area of Hazaribagh district of Jharkhand. Police said that the bus overturned and fell into Shivane River located on the NH-100 Hazaribagh- Bagodar Road.

Among the deceased are four women and four men. Locals said that the bus occupants hailed from Sikh community and were travelling to Ranchi from Giridih to participate in a religious function. Upon receiving information locals first reached to the rescue of the locals. Police too arrive on the spot and took the injured to hospital.

Authorities said that all the injured have been admitted at Sheikh Bhikhari Medical College Hospital at Hazaribagh. Superintendent of Police Hazaribagh Manoj Ratan Chouthe said the bus carrying more than 50 passengers going to Ranchi from Giridih broke the railing of a bridge and fell into a dry spot in Shivane River under Tatijharia Police Station area.

The SP said that four bodies have been brought to Sadar Hospital Hazaribagh while two others died while being rushed to a private Hospital while a woman got trapped beneath the bus. The exact number of passengers in the bus was 52 he said adding that 12 with serious injuries are admitted while many others with minor injuries were allowed to leave after minor first aid.

Adding further he said that while seven of them died on Saturday another one died on Sunday. The deceased have been identified as Rani Kaur Saluja, Surjit Singh, Kamaljeet Kaur, Jagjeet Kaur, Ravindra Kaur, Amrut Pal Singh, Shiva Singh and Bhupendra Singh. All of them are residents of different areas of the Giridih district.

All the eight people who had lost their lives in the Hazaribagh bus accident were cremated on Sunday at the Marwari Mukti Dham located in the city. Sevadar of Giridih Gurudwara Harmendra Singh performed the rituals after which the pyre was lit. Initially, three bodies were brought for cremation but later five more were brought to the cremation grounds.

Former Koderma MP Ravindra Rai, former Giridih MLA Nirbhay Kumar Shahbadi, and prominent persons from other walks of life including industrialists, businessmen, officials from the district administration and police were also present on the spot.