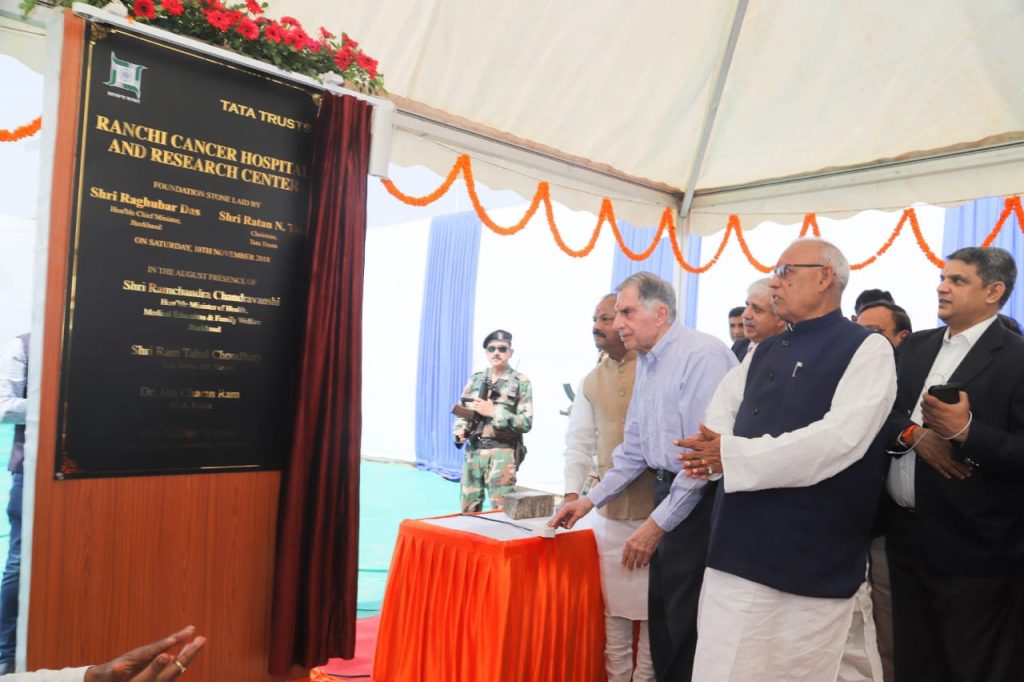 Chief Minister Raghubar Das has said that the Tata Trust has fulfilled the demand for the establishment of Cancer Hospital made during the Momentum Jharkhand, thus the people of Jharkhand will no longer require to go to other states for treatment of cancer. He was speaking in the foundation stone laying ceremony for Ranchi Cancer Hospital and Research Center at Sukruhuttu, Kanke in Ranchi. He said that in 4 years, construction of 6 medical colleges, construction of AIIMS has started. Today, the construction work of cancer hospital also started.

The Chief Minister said that Tata Group uses 80% of their profit for the welfare of the public. This tradition is 100 years old. Because Jamshedji Tata had sent a message that whatever wealth we are accumulating has been obtained from society so it should be spent for the upliftment of the society. Other industrial houses should also take inspiration. Mr. Das told that the company started work to produce steel in India long before independence. After independence, Jamshedji started an effort to prosper the nation and the state. The work is being done by the group in every field.

On this occasion, Padam Vibhushan Ratan N Tata said that the effort of the Chief Minister is a success. Chief Minister talked about starting a cancer hospital during Momentum Jharkhand. After one and a half years the efforts of the visionary Chief Minister succeeded. This hospital will prove to be very important for the people of North East. I am happy to come to Ranchi and complete this work. Every year millions of people are dying of this disease. Our effort is to reduce the number of people dying from cancer. Research work is in progress for this.

Health Minister Ram Chandra Chandravanshi said that today is the golden day. Tata Trust has done good work for cancer patients. Seeing the success of the hospital seats will be increased. People from neighbouring states will also get benefit from this hospital. In the coming days, the modern cure of cancer will be ensured. The construction of AIIMS in Deoghar is being done rapidly. OPD will start from April.