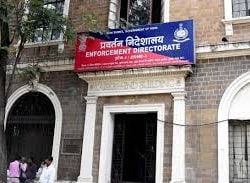 The PMLA court granted permission to the ED to question him at the Birsa Munda Central Jail in Ranchi on Saturday and Sunday. The permission was sought in the wake of the revelation of some new facts and evidence in the MNREGA scam. Suman Kumar Singh is a chartered accountant of IAS officer Pooja Singhal.

He is an accused along with Pooja Singhal in the MNREGA scam. In the month of May, the ED conducted raids at different locations and premises related to Pooja Singhal, Suman Kumar Singh and others. During the search, huge cash amounting to Rs.19.76 crores was recovered and seized from the premises of Suman Kumar Singh.

Apart from that documents, records, digital devices etc. related to the matter were also recovered. Some movable properties in the form of high-end vehicles were also found during the course of search from the premises of Suman Kumar Singh.

He could not disclose the legitimate source of such income. Suman Kumar Singh disclosed in his statement before the ED that most of the cash seized from his premises belongs to Pooja Singhal, which was kept in his house and office, on her behalf.

Further, the accused Suman Kumar was also a beneficiary of closure proceeds received by Pooja Singhal, which were purchased from the cash deposited in her account during her tenure as Deputy Commissioner in the Khunti district.

They also utilized the proceeds of crime to purchase land in the name of Radhey Shyam Fireworks LLP where Pawan Kumar, who is the brother of Suman Kumar Singh and Pooja Singhal’s mother Kamlesh Singhal were partners and Rs.1.33 crore was given in cash for it which was part of proceeds of crime collected and accumulated on behalf of Pooja Singhal.