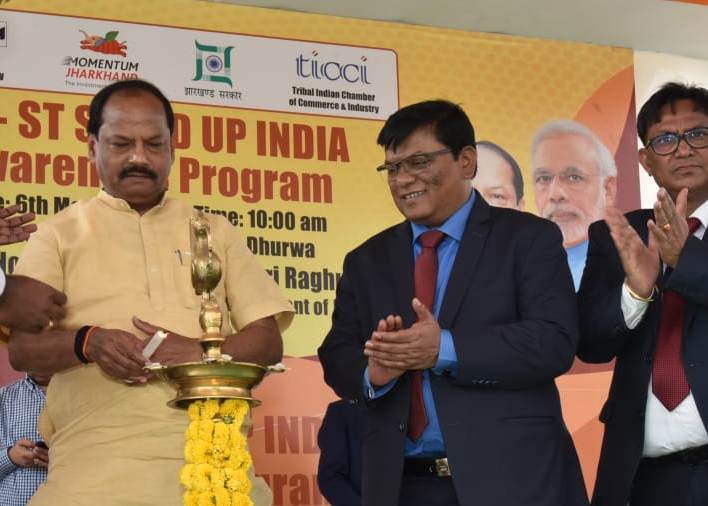 Chief Minister Raghubar Das said that SC-ST entrepreneurs should become job giver instead of a job seeker. The state government will soon make an industrial policy, under which SC-ST entrepreneurs will get a subsidy. A draft will be prepared soon for this, after which this policy will be implemented in Jharkhand. The Chief Minister was speaking in the program organized under SC-ST Stand up India Awareness Program in Dhurwa, Ranchi.

In this program organized by the Directorate of Industry and the Jharkhand Government, the Chief Minister flagged off 10 LPG tankers. This tanker has been given to the young entrepreneurs of Jharkhand on the basis of a contract for the next 5 years.
The Chief Minister said that SC-ST youth will become financially strong by running 45 LPG tankers. For the last 67 years, the SC-ST people were considered to be the only vote bank in this country. The central government has started to change at a bigger level; its effect has also been reflected in Jharkhand. The Chief Minister said that the SC-ST youth should also develop as other sections of the society. Prime Minister has given this order to all the banks to provide a loan to at least two SC-ST entrepreneurs through Stand up India.

The Chief Minister said that people of SC-ST society should become an entrepreneur. Centre and State Government will provide a market to them. In the coming days, good policies will also be made in collaboration with DICCI (Dalit Indian Chamber of Commerce and Industry) and TICCI (Tribal Indian Chamber of Commerce and Industry), which will give direct benefit to these people of the society.

In the program, LPG gas tankers were provided to 29 ST and 16 SC youths in the program. 10 LPG gas tankers were flagged off by the Directorate of Industry and the State Government. The said tankers have been allotted to young entrepreneurs for 5 years. Earlier, inaugurating the program, the Chief Minister garlanded the statue of the Constitution maker Baba Saheb Dr. Bhimrao Ambedkar. Padmashree Milind Kamale, a special guest of the program from Pune, Maharashtra was also welcomed.

Giving information about DICCI and TICCI, the officials of the institute informed that SC and ST entrepreneurs are being given a platform in the financial world. Under this, 10 thousand people have been made entrepreneurs so far. It has its chapters in every state as well as abroad. A large number of youth is working in transporting.

Industry director Ravi Kumar said that a cell has been built on behalf of the state government in this regard. General Manager level officials are the chief. This cell is preparing the entrepreneurs in the state. There has been a meeting with PSU several times. Under the Standard Policy, women are being made entrepreneurs with the help of banks.

Milind Kamble said that an agreement has been made with 250 PSUs of the country. Under this, the purchase of goods worth Rs. 6 lakh crores is procured by PSU every year. They have been told that they make 5% of their purchases with SC-ST entrepreneurs. On this, Rs 30 thousand crores of purchases are currently being made from SC-ST entrepreneurs. While addressing the program, Mr. Kamble also sought the subsidy scheme for the entrepreneurs in the state from the Chief Minister. He said that subsidy is being given in Maharashtra and Telangana for capital investment.

In the program, officials of DICCI and TICCI, Khelram Murmu, Rajendra Kumar, Munmun Vishwas, Domaan Tudu and a large number of people were present.