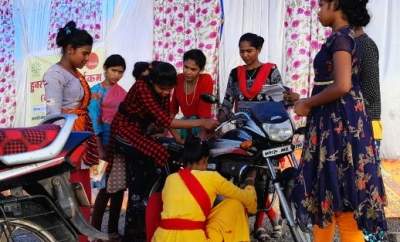 Khandwa (Madhya Pradesh) (IANS/ 101Reporters) Tribal girls in Khalwa block of Khandwa district are breaking the glass ceiling that once tied them down to farm work to earn a pittance.

Mantu Kasde of Balrampur works on the shock absorber and clutch plates of motorcycles at a garage in Khalwa, after having completed a three-month course in repairing. “I shall open my own garage soon,” she beams with pride.

Sativardha of Jamdhad has launched a puncture repair service, a beauty parlour and a cutlery shop just outside her home. She completed training for these jobs almost six months ago, after her higher secondary education, to make around Rs 5,000 every month.

Her seven-member family used to migrate every year in search of work. Thanks to her enterprise, the family makes enough money now to give up the idea of migration altogether. “My father does not need to move out for work anymore.”

Six months ago, Gayatri Kasde of Sawali Kheda was trained as a mechanic under Babubhai, a mechanic in Khalwa town. Now she works from both Babubhai’s garage and her home.

Radha Yadav of Bagda repairs motorcycles, besides running a grocery shop. She has managed to save Rs 15,000 over the last six months. Her brother, who was earlier working at a factory in Khandwa, has returned home to help run her business.

Sakiya Vardhaya belongs to a landless family from Jamdhad, comprising her parents, three sisters and two brothers, which migrated annually for work. She now repairs two-wheelers, assisted by her two sisters. The money she earns not only helps run the family but also takes care of her studies. Sakiya, a BA final year student, commutes daily to her college in Khandwa.

Most of these girls fall in the 18-24 age group and belong to the Gond and Korku tribes, which do not practise gender discrimination. So far, 50 girls have received training under the aegis of Spandan Samajsewa Samiti, a non-governmental organisation (NGO).

Hitherto known for the migration of its residents, Khalwa is witnessing a turnaround with young girls entering male-dominated vocations.

Recounting how they embarked on such unique journeys, the girls told 101Reporters that they realised there was little to do in Khalwa other than sowing and harvesting crops. At the same time, the block had a whole lot of two-wheeler and mobile phone users. Whenever something needed repair, the villagers had to travel to the nearest urban centres such as Khalwa, Patajan, Roshni and Ashapur. Some of these places were located over 20 km away, and that too with negligible public transport.

In search of fruitful employment, they approached NGO Spandan, which has been actively involved in stemming migration in Khalwa for many years. Initially, the girls were sent to local mechanics to acquire basic knowledge of repairing. Then came some financial assistance to open small shops adjoining their homes. Further training happened in Khandwa, followed by a five-day workshop in the first week of August to educate them about the finer points of repair.

Incidentally, the families wholeheartedly supported the girls right from the beginning. As Mantu points out: “When Seema didi of Spandan suggested that I take up garage work, I was enthused. I did not see anything wrong in doing the job.”

Other girls chime in saying their families never stopped them. “We enjoy doing this work. It is true that many people doubt our skills, but we feel proud to earn our daily bread through hard work.”

The girls now read brochures and manuals that help them repair motorcycles of any brand available in the market. They are also adept at dealing with all kinds of two-wheeler punctures. As and when the demand arises, they repair mobile phones too. A few others work at beauty parlours, handling foundations and makeup.

According to Seema Prakash Michael of NGO Spandan, when they were looking at ways to stem migration, some girls suggested measures to generate local employment in Khalwa. They said they felt unsafe when family members went to other cities/towns in search of work.

“After several rounds of discussions, we hit upon the idea of mobile and two-wheeler repairs. We were initially apprehensive, but the girls exhibited remarkable skills and enthusiasm. In fact, they surpassed all our expectations,” Michael says.

Opening a tyre to repair a puncture seemed a daunting task to many at the outset, but everything came easy once they mastered the technique. NGO Spandan also provided them with the necessary tools to set up businesses. In the next couple of years, the organisation intends to train 1,000 girls.

Setting up an all-women service centre in Khalwa is another ambitious plan of the NGO. An organisation with its roots in the Korku community has promised land to this effect. Once it is acquired, the centre will launch operations with a woman mechanic and helper. According to Michael, it will also be developed into a training centre in future.

Laurels have already come their way with a bike showroom located at the block headquarters of Khalwa recently organising a special camp where the girls could display their talents. Though they subsequently received job offers from the showroom management, the girls declined them. Nevertheless, the showroom owner has decided to offer free training to hone their skills.