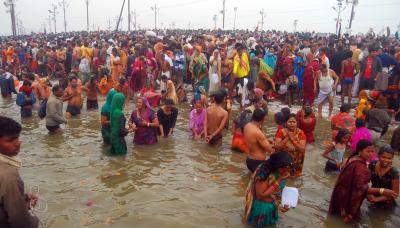 Lucknow (IANS) The Maha Kumbh in 2025 will be unparalleled in grandeur and will also showcase a ‘New Uttar Pradesh’ of ‘New India’.

It will showcase the state’s administrative capacity, rich culture and tourism possibilities.

Uttar Pradesh Chief Minister Yogi Adityanath has asked officials to ensure that the event’s management in 2025 should be so good that the state outperforms its achievements during the 2019 Kumbh.

The chief minister, according to the government spokesman, asked officials to focus on the need to ensure quality and adherence to timelines in the tender work related to the event. He has directed that a committee be formed under the divisional commissioner which will monitor projects on a weekly basis.

The chief minister said that “For the first time, Kumbh 2019 was given a new logo. The Akshayvat and Saraswati Koop, closed for 450 years, were opened for darshan. Over 24 crore devotees and pilgrims took a dip in the Ganga river. The President, Prime Minister, Chief Ministers of various states and other dignitaries including ambassadors of 70 countries and more than 3,200 NRIs came to Prayagraj Kumbh-2019.”

To ensure proper sanitation during the mega event, the Chief Minister said that the number of toilets should be increased and special arrangements should be made for the cleaning staff to ensure their stay and remuneration.

He further directed officials to increase the number of ghats as well as the length of ghats. To ensure that the Ganga was clean and flowed uninterrupted, an action plan will be made to complete ongoing projects for river cleanliness in all districts from Bijnor to Prayagraj.

A coordination will be maintained with the finance department to ensure timely release of funds so that no work is delayed.

For enhanced security, the chief minister said that arrangements should be made for adequate management in case of fires and disaster events. The police should have access to fire equipment, anti-terrorist surveillance, baggage checking equipment, river barricading, among others, for better disaster management.