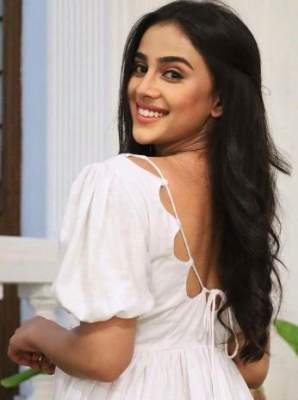 Mumbai (IANS) ‘Mehndi Hai Rachne Waali’ actress Sayli Salunkhe, who is currently seen in the TV show ‘Bohot Pyaar Karte Hai’ recalled how she made her place in the entertainment industry and got her debut project.

She said: “I was doing music before I debuted in TV industry. So, one of my friend asked me if I was interested in doing music video to which I said a definite yes. As I was doing that, a channel employee approached me and inquired about my interest in appearing on television.”

Sayli is playing the role of Indu in the show, who is in love with Ritesh Malhotra, played by Karan V Grover. Indu’s approach towards life changes after she met Zoon (Kiara Sadh), a new-born orphaned baby and decided to nurture her.

On talking about her debut Marathi serial ‘Chhatriwali’, she added: “I responded with ‘yes’, saying that I would love to do it. There I got my first role of portraying as a sister in a Marathi show. That’s how I debuted in television industry and so far I’m in love with my journey.”