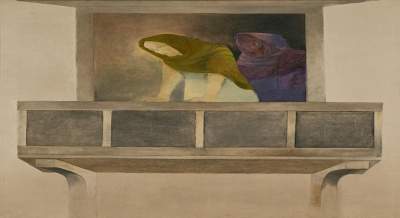 Talking about the upcoming auctions, Sneha Gautam, Vice President, Client Relations, AstaGuru Auction House states, “We are very happy to present these two extremely diverse and interesting collections of works in our upcoming ‘Present Future’ and ‘Modern Treasures’ auctions. The ‘Present Future’ auction represents prevalent art trends and gives an insight into the future of contemporary Indian art while the ‘Modern Treasures’ auction presents a wholesome view of the journey of Modern Indian Art, with works spanning multiple periods and genres. The Indian art market is constantly expanding and witnessing new possibilities in terms of the influx of important works. So, we have finely curated the catalogs to bring works that are not only rare and unique but also shed a light on extremely important phases in the career of these artists. These auctions are a great opportunity for our collectors to add great aesthetic value to their art collection.”

Leading the lineup is a work by artist Tyeb Mehta, lot no. 22, appearing in an auction for the first time. Scaling over 5 feet, this oil on canvas painting is from his Diagonal series, which is considered to be one of his most important bodies of work by him. The presented lot (1973) was created during the phase when the diagonal was no more a newfound element but had transformed to be the primary pillar of the artist’s ideation process. The motif and its usage were a matter of familiarity and Mehta had deciphered its visual properties. It will be offered at an estimate of INR 21,00,00,000-26,00,00,000.

Appearing in auction for the first time as well is lot no. 13, a 100-year-old work by M.V. Dhurandhar. Executed in 1922, the untitled oil on canvas painting captures what is undoubtedly the most critical moment in the epic Mahabharata. Known as DraupadiVastraharan, the grave disgrace of Draupadi at the hands of the Kaurava brother, Dushasana became the genesis of the epic battle at Kurukshetra. The work is a paradigm of M. V. Dhurandhar’s artistic genius, as he amalgamated the elements of western academic realism with the ethos of Indian tradition. The work appeared in the publication ‘M.V. Dhurandhar – The Romantic Realist’ by the National Gallery of Modern Art, Mumbai in 2018. It will be offered at an estimate of INR 2,50,00,000-3,00,00,000.

Executed on the same day as the death of revered playwright Safdar Hashmi in 1989, lot no. 26 titled ‘Safdar Hashmi’ by M. F. Husain is telling of how deeply he was affected by the killing of a fellow artist. Regarded as one of the most important works from M. F. Husain’s oeuvre, this work spanning over 10 feet is a testament to his fearless and boundless artistic approach to portraying the injustices that occur in society. This work was also the first painting of Modern Indian Art to a record-winning bid of Rs 10 lakhs at the Times of India auction on the INS Jawahar in 1989. It will be offered at an estimate of INR 5,00,00,000-6,00,00,000. The auction will also showcase other large-scale masterpieces by the artist. Lot no. 41, a painting from his very first set of the British Raj series, depicts a nautch girl. This series is at once personal and political and chronicles the artist’s reflections, as well as his creative genius. Titled ‘Raj’ and spanning over 7 feet, it will be offered at an estimate of INR 4,00,00,000-5,00,00,000. Also showcased in lot no. 31 is one of the panels from his famous Theorama Series which is a set of 10 large-scale panels paying homage to 9 globally followed faiths and the tenth dedicated to humanity. Titled ‘Theorama Series – Islam,’ this particular painting spanning over 11 feet depicts the integral elements of Islam and will be offered at an estimate of INR 2,50,00,000-3,00,00,000.

A stunning diptych by Akbar Padamsee titled ‘Paysage Aux Fleurs & Nu’ dated 1965, lot no. 18, will also be offered for bidding. The landscape sans any figures evokes a sense of silence and desolation. The right panel of the artwork depicts a solitary nude woman figure, a subject that remained a fascination for Akbar Padamsee throughout his career. This oil on canvas work will be offered at an estimate of INR 4,00,00,000-6,00,00,000.

Lot no. 34 titled ‘Modern Adam and Eve’ by F. N. Souza gives a great in-depth insight into the master’s working process. The presented lot will be appearing in auction for the first time and is also accompanied by 9 sketches Souza made right before he painted the work. It enables the viewer to understand the various technical propositions a creator addresses prior to undertaking the task of painting a large-scale work. The oil on canvas was also the primary subject of an article the artist wrote in the ‘Illustrated Weekly of India’ 13th-19th March 1993. It will be offered at an estimate of INR 1,20,00,000-1,50,00,000.

Also appearing for the first time in the auction is Jogen Chowdhury’s large-scale crosshatch work titled Partition 1947, lot no. 36, will be offered with the estimate of INR 2,00,00,000 – 2,50,00,000. During the partition in 1947, the artist, with his family, was forced to migrate to Kolkata. Emerging out of this sense of loss and agony, his art practice became a way for him to comment on the ongoing violence in the world and also that of pain as an innate and unavoidable part of human suffering.

Leading the contemporary lineup are two exceptional works by sculptor Anish Kapoor. Lot no. 81 belongs to the artist’s notable series of reflective stainless steel discs he has been creating since the 1990s. Pieces from this series attempt to create both a seamless and distorted view of what they reflect depending on their finishes. This piece spans over 5 feet in diameter and was created in 2011. It will be offered at an estimate of INR 5,50,00,000-7,50,00,000.

Lot no. 17, dated 2005, is another stunning sculpture by Anish Kapoor created in bronze and lacquer. Anish Kapoor’s smaller sculptures provide a more intimate look into his work and are a departure from his usual large-scale public commissions. It will be offered at an estimate of INR 70,00,000-80,00,000.

Nataraj Sharma’s stunning work titled Swimmers Manual is an oil on canvas work executed in 2018, spanning 9 feet. Nataraj’s art practice offers incisive commentary about the complex relationship between humans, landscapes, and urbanization. Executed with a unique visual code that adds new connotations to already familiar imagery, these large-scale works are dramatic, broody, quiescent, and defiant, all at the same time. The work has previously been part of the artist’s solo exhibition titled ‘Swimmer’s Manual and Other Stories’ at Dr.BhauDaji Lad Museum, Mumbai organised by Vadehra Art Gallery, New Delhi, 8th April – 11th May 2018. It also features on the cover of this auction’s catalog. It will be offered at an estimate of INR 30,00,000-35,00,000.

Surendran Nair’s work, lot no. 25, titled ‘Hand to Mouth: 15 Degrees of Separation’ – Elysium is part of his Cuckoonebulopolis series that he began in 2000. The series takes its name from the perfect utopian world between heaven and earth that was imagined by Greek playwright Aristophanes in his satire titled ‘Birds’. The premise of the play rests on a man convincing a bird to construct a new city in the cloud called the Cloud Cuckoo Land. The oil on canvas, executed in 2011, will be offered at an estimate of INR 15,00,000-20,00,000.

Debanjan Roy’s Super Gandhi (Ed. 5) will also be showcased at the auction. He is known for his fascination with Gandhi as a subject for his sculptures and has featured the Father of the Nation in his works throughout his career. This particular sculpture sees the artist reimagining the Mahatma as Superman wearing the superhero’s signature red cape but also Gandhi’s trademark dhoti. It was displayed at Debanjan’s solo exhibition ‘Toying With Gandhi’ at AkarPrakar in Kolkata (2019) and was published in the 4th November 2019 issue of The Indian Express. It will be offered at an estimate of INR 4,00,000-5,00,0000.

Lot no. 38 titled Dear Dad Knows Best by artist Raqib Shaw was executed in 2009 in his signature style that includes the application of various mediums such as acrylic, glitter, enamel, and rhinestones, the work is presented in the frame which was also customized by the artist. The piece will be offered at an estimate of INR 20,00,000-30,00,000.

Lot no. 46 is an oil on canvas painting by Thukral&Tagra titled Science, Mystery & Magic II (Superman). Thukral&Tagra visuals have evolved over the years to become rooted in the socio-political aspects of Indian culture. They explore the changing aspirations of the middle class and the repercussion of a materially consumed contemporary India. With humorous and playful compositions, the artists have also expressed their concerns on the essence of an Indian identity. This particular lot, spanning 7 feet, will be offered at an estimate of INR 15,00,000-20,00,000. Another large-scale work by Thukral&Tagra, lot no. 78, will also be showcased at the auction. This Diptych titled Phantom @ XI – B III spans 12 feet and will be offered at an estimate of INR 15,00,000-20,00,000.