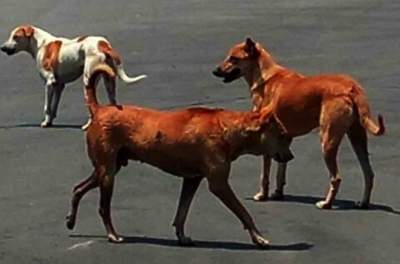 Sudden spike in rabies cases a cause of concern for India

New Delhi, Oct 2 (IANS) Rabies is one of the oldest recognised Zoonotic diseases with almost hundred per cent fatality and has evolved as an important public health concern worldwide. According to some studies, around 174 lakh persons are bitten annually worldwide and more than 55,000 people die annually of the disease.

The sudden rise in cases of dog bites in India has become a cause of concern for all.

One incident of a pet dog biting a minor boy inside the lift of a society in Ghaziabad was a shocker and compelled everyone to think about random dog bites and steps to prevent it.

The national guidelines for rabies say that it is an acute viral disease that causes fatal encephalomyelitis in virtually all the warm-blooded animals including humans. The virus is found in wild and some domestic animals, and is transmitted to other animals and to humans through their saliva.

In India, dogs are responsible for about 97 per cent of human rabies, followed by cats (2 per cent), jackals, mongoose and others (1 per cent). The disease is endemic throughout the country.

“Bites by all warm-blooded animals necessitate post-exposure prophylaxis. As rabies is practically 100 per cent fatal, bites by dogs and cats in particular must be considered as a ‘medical emergency’ and the ‘life-saving’ post exposure prophylaxis must be provided immediately,” say the National Guidelines for Rabies.

The National Rabies Control Programme was approved to address the issue of rabies in the country during the 12th Five Year Plan as Central Sector Scheme to be implemented under the Umbrella of NHM with two components – Human and Animal Components.

“Preventing rabies involves action at several levels. Reducing the number of dog bites is an important step. Although most dog bites are not rabid, it is not always possible to say which dog is rabid. Therefore, it is always better to take necessary precautions.

“Aggressive dogs regularly bite people, such dogs exist among the large stray population as well as among pet dogs. Some pet dogs get abandoned because of this habit, and they join the stray dog population while continuing to bite people without provocation.”

Rabies is almost always fatal for human if post-exposure prophylaxis is not administered immediately after the bite.

It infects the central nervous system, ultimately affecting the brain and resulting in death. The time lag between the bite to rabies and onset of symptoms of the disease, is usually about a few days to few months in humans, depending on the site and severity of exposure.

Dr Jayadevan noted: “Following the ancestral wolf instinct, stray dogs also occasionally attack people in packs, and children are easy victims due to their small size. Rabid dogs on the other hand bite everyone and everything in sight, indiscriminately. They even bite at pieces of wood.”

“Teaching people about first aid measures including immediate washing of wound with soap and water to kill the rabies virus is important. Failure to seek medical help is the chief cause of rabies deaths.”

Rabies is a vaccine-preventable disease in both humans and animals. About 80 per cent of human cases occur in rural areas. To achieve zero human deaths from dog-mediated rabies by 2030, National Action Plan based on One Health approach has been launched in 2021 in the country.

Dr Jayadevan said that rarely does rabies occur despite vaccination. This can occur when dogs bite in high-risk areas such as the face and neck which are close to the brain. Children are short in height and more likely to be bitten in such areas.

“Once the virus enters the brain, it is fatal. Our chance of stopping the virus exists only in the few days to weeks before it reaches the brain. That is through prompt wound washing, vaccination and by use of immunoglobulin in selected cases,” he said.