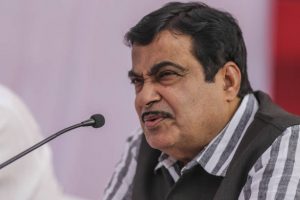 Ranchi, Aug 28: Union Minister for Water Resources Nitin Gadkari on Tuesday chaired a high-level meeting in New Delhi over the issues related to Mandal Dam in which his cabinet colleague Arjun Ram Meghwal along with Jharkhand’s Water Resources Minister Chandraprakash Chowdhary was present.

The meeting was also attended by the officials of the departments concerned and MPs of Chatra, Palamu, Aurangabad, Jehanabad and Gaya. During the meeting, Mr Gadkari held a detailed review of all the pending works and the works which have been done so far and expressed his anger over non-clearance for the second phase. He asked the officials of the department to complete all the pending works within a month and also send a report in this regard.

He said that it was decided that another meeting will be organized in the first week of October following which the date for laying the foundation of the project will be fixed. Chatra MP Sunil Singh said that the meeting ended on a positive note with the Union Minister being serious over the issue. He said that after the meeting in October the date for laying the foundation stone either in November of December will be held. The meeting was attended by Palamu MP VD Ram, Aurangabad MP Sushil Singh, Gaya MP Hari Manjhi, Jehanabad MP Arun Kumar and others.