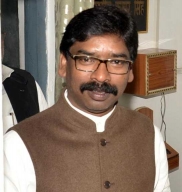 Ranchi (IANS) Jharkhand opposition parties on Thursday decided to give final shape to their alliance for the upcoming Lok Sabha and Assembly elections by the end of January.

The decision was reached at following an opposition meeting called by Leader of Opposition in the state Assembly and Jharkhand Mukti Morcha (JMM) Executive President Hemant Soren at his residence to decide the strategy to take on the ruling Bharatiya Janata Party (BJP) in the polls.

The meeting was attended by the leaders of JMM, Congress, Rashtriya Janata Dal (RJD), Jharkhand Vikas Morcha-Prajatantrik (JVM-P) and the left parties.

“The alliance will take shape by January 31. We have agreed to throw the BJP government from the Centre and the state,” Baulal Marandi, former Chief Minister and JVM-P President, told reporters.

After the meeting, Hemant Soren said: “The alliance for Lok Sabha and Assembly elections will be announced both in Jharkhand and New Delhi.”

The political parties attending the meeting also decided to come up with the list of seats they would like to contest by January 30, so that a seat-sharing formula could be worked out.

The parties concerned withhold another round of talks on seat sharing once their lists are ready. The final decision will be taken in the next meeting scheduled for January 30.

The RJD has announced to contest the Lok Sabha and Assembly polls in Jharkhand under the leadership of Hemant Soren.

“Hemanat Soren is the leader and face of the opposition parties. We will fight the elections under the leadership of Hemant Soren,” said Annapurna Devi, the state RJD chief.