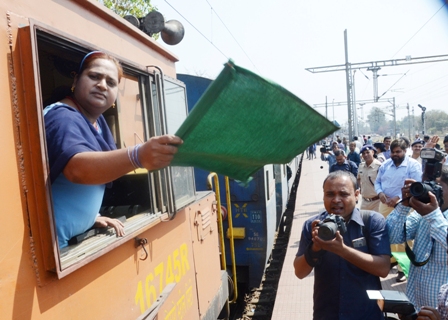 Ranchi, Mar 8: In a first of its kind initiative the Ranchi Rail
Division on the occasion of the International Women’s Day for the
first time handed over the entire operation of the Ranchi-Loardaga
passenger train to the women staff of the railways.

At 10.20 am in the morning the Ranchi-Lohardaga-Tori passenger train
was handed over to a women pilot, co-pilot, guard, TTE and women
jawans of the RPF. It was a women employee pointsman Shakuntala Devi
which gave the green flag to the train in presence of ADRM Vijay
Kumar.
The ADRM said that one trip from Ranci to Tori has been given to
women staff which included two pilots, a women guard, five women TTE
and five RPF women jawans. He said that as part of celebrations of the
International Womens Day the rail division came up with this concept.
Dipali Amrut who is the first women pilot of the Ranchi railway
division was given the charge of operating the train while the job
assistant pilot to Roji Sinha and guard Sabita Bela Toppo.