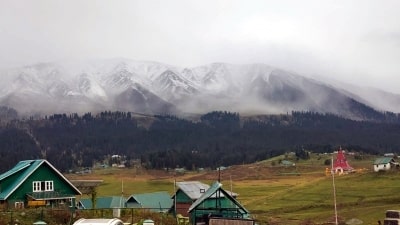 Srinagar (IANS) Just three years ago only the elite class in Jammu and Kashmir enjoyed the privilege called health insurance. For a common man, health insurance was not even an option as he couldn’t afford to pay hefty premiums of the insurance companies.

After the Centre scrapped the Article 370, a temporary provision in the Constitution, on August 5, 2019 and turned Jammu and Kashmir into a Union Territory, the government ended the discrimination between the elite class and the common people by implementing the Article 14 (Right to Equality) in letter and spirit in the Himalayan region. The idea was to ensure that no one remains deprived of the basic facilities which every Indian citizen enjoys.

The health insurance which used to be a privilege enjoyed by an elite class till 2019 was extended to every J&K denizen through Ayushman Bharat scheme which led to everyone getting covered without paying any premium to the insurance companies as the government chose to bear the burden so that no one is left out.

These schemes have removed the burden of out-of-pocket expenses and have turned the entire process of paying for healthcare cashless. All public and empanelled private hospitals have been directed not to charge any extra payment for medical care from all PMJAY beneficiaries.

Under AB-PMJAY and AB-PMJAY SEHAT, during the current policy period, 1,47,582 cases have already been benefited amounting to Rs 221.66 crore, out of which Rs 129.83 crore have already been paid to the hospitals by the insurance company, thus ensuring free of cost specialized treatment to all.

These schemes were launched to provide best and advanced health care facilities to the people of Jammu & Kashmir. The AB-PMJAY SEHAT scheme in convergence with the Central Government’s AB-PMJAY scheme provides free of cost ‘Universal Health Insurance Coverage’ up to Rs 5 lakh per family on a floater basis.

Schemes also provide for healthcare benefits offered by specialists like cardiologists and urologists. Moreover, advanced medical treatment like that for cancer, cardiac surgery and others are also covered.

The beneficiaries under these schemes can seek treatment across the country. This scheme covers pre-existing illnesses and makes treatment mandatory in all public hospitals.

At present 97 per cent of the population of Jammu & Kashmir has insurance cover and the administration is spending Rs 2 crore everyday on the treatment of the common people.

The SEHAT Golden cards have been provided to 80 lakh citizens, with 28,000 hospitals extending treatment facilities to them across the country.

After the abrogation of so-called special status of J&K and its transition into a Union Territory several steps have been taken to improve the infrastructure and increase access to quality healthcare services in the region. Earlier there were only four medical colleges in Jammu & Kashmir, today seven new medical colleges have been established. Earlier there were 500 medical seats, now 2,000 students can pursue MBBS degree from J&K.

Work is currently under progress on two All India Institute of Medical Sciences (AIIMS) in Samba and Awantipora at the cost of Rs. 2000 crore each.

Five Government Medical Colleges have been made functional at Anantnag, Baramulla, Rajouri, Doda and Kathua.

The Centre has sanctioned funds for establishment of a State Cancer Institute at Government Medical College, Jammu at an approved cost of Rs. 120 crore, and work on ground has commenced. The Medical Education Department has proposed to establish two medical universities, one each at Jammu & Srinagar, to cater to the needs of 10 medical colleges, nursing colleges, paramedical colleges, etc.

According to the figures dished out by the officials a total of Rs 7,177 crore has been invested in development projects for the health sector in J&K.

A new 500-bedded Children Hospital built after spending Rs 115 crore has come up in Srinagar. Rs 900 crore have been earmarked for modernizing existing hospitals in J&K.

Politicians, who ruled J&K till 2018, were least concerned about the issues like providing health insurance, quality and accessible healthcare for all. The former rulers in their speeches used to claim that the health sector is a priority but they always fell short of implementing their promises. The common man was never a priority for them as they focused more on politics rather than providing good governance. For them J&K was a “troubled zone” where no development could have taken place without the involvement of Pakistan and the terrorists sponsored by it. As on date all the claims of these leaders stand punctured as J&K has developed at a rapid pace without involving the trouble mongers.

During the past three years J&K’s health sector has witnessed a sea change. It has become affordable and accessible for the common people. The regional imbalances that existed earlier have been removed and J&K is performing better than the national average on several parameters. The health indicators are an ample proof of the fact that the administration has worked hard to uplift this all important sector. The main objective of the helmsman has been to make the health services effective, people-centric and equitable.

In “Naya Jammu and Kashmir” health sector has been a priority and the government has ensured that everyone is treated equally irrespective of him belonging to any section of the society. Today any J&K denizen having an Ayushman Bharat “Gold Card” can approach any top hospital in the country for treatment.

The privilege of health insurance that was enjoyed by a selected group of people in Jammu and Kashmir has been extended to all and it has helped many poor people to fight the ailments.