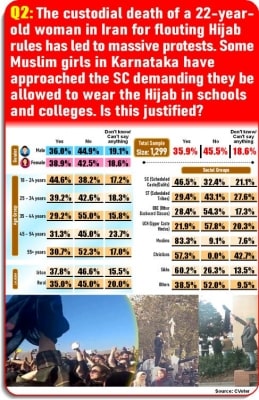 New Delhi (IANS) Massive protests have erupted in Iran after the custodial death of a 22-year-old young woman, who was detained by Iran’s moral police for allegedly violating the hijab law of the country.

According to the human rights activists, at least three people died in police firing on the demonstrators, who took to streets protesting the custodial death of the young activist.

Notably, in the past few weeks, Iran has witnessed several activists appealing to women to defy the Islamic dress code of covering their heads, inviting crackdown from the country’s hardliner rulers.

In contrast to the situation in Iran, some Muslim girls in Karnataka have approached the Supreme Court of India demanding they be allowed to wear hijab in schools and colleges.

CVoter-IndiaTracker conducted a nationwide opinion poll on behalf of IANS to know what people think about the demand of the Karnataka Muslim girls on wearing Hijab.

The survey revealed that 19 per cent of the female respondents were clueless on the issue.

Interestingly, during the survey, the majority of respondents from the minority communities — Muslims, Sikhs and Christians supported the demand of Karnataka Muslim girls to wear head coverings in educational institution.

According to the survey data, 83 per cent Muslim, 60 per cent Sikh and 57 per cent Christian respondents opined that the demand of the Muslim girls is justified.

However, at the same time, 58 per cent of Upper Caste Hindus and 54 per cent of Other Backward Classes opposed the demand.

The survey further revealed that more urban respondents — 38 per cent believe that Hijab should be allowed in schools and colleges in comparison to 35 per cent of rural respondents, who replied on similar lines.