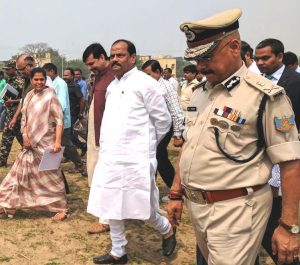 Sahibgunj, Mar24: Chief Minister Raghubar Das said that the bridge over Ganga
would be a milestone for development of not only Jharkhand but also
for the North Eastern Region of the country.
Speaking to  reporters here he said Prime Minister Narendra Modi on
April 6, would lay the foundation stone for Ganga bridge and a
port in Sahibganj. He said that once the bridge is constructed
Jharkhand and Central India would be able to connect with the North
East and Mayanmar.
He said that during his visit to Sahibganj the Prime Minister under
the cashless campaign would also distribute 1 lakh smart phones among
the members of the women self help groups. He said that for the
development of the Paharia primitive tribe of the Santhal Pargana
region a paharia battalion has been constituted and the Prime Minister
would also be handing over appointment letter to the members of the
women paharia battalion.
The Chief Minister also chaired a high level meeting at the circuit
house here with the officials of the government and cabinet ministers
and reviewed preparations for the Prime Minister’s visit.
Mr Das also urged the people to attend the function in huge numbers as
it was an occasion to celebrate as their demands for several years
was now being realised. He said that the bridge over river Ganga is a
gift to the people of the area by the Prime Minister.
He has asked the officials to make sure that people coming to
participate in the function do not face any difficulty and proper
seating arrangements should be made. He instructed to make arrangements
for adequate water tankers and install large Led screens at the venue.
He asked to put  road directions and install signs  containing
important information and also asked to ensure adequate security in the
city. Mr Das said that the purpose of politics was development of
the people and the visit of the Prime Minister further strengthens the
promise of development.
Chief Secretary Rajbala Verma detailed the Chief Minister about the
preparations for the Prime Minister’s visit. Later she held a separate
meeting with the officials regard the event. She asked the DC an SP to
make cheque slip of their work and carry out review point wise of
every task. She instructed the officials to complete all necessary
works within 2-3 days.
Those present included cabinet ministers Louis Marandi, Randhir Singh,
Raj Paliwar, BJP MLAs Anant Ojha, Tala Marandi, Chief Secretary
Rajbala Verma, DGP D K Pandey, Princpal Secretary to the Chief
Minister Sanjay Kumar and various other officials.