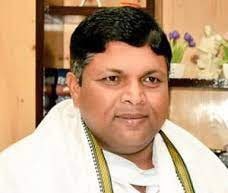 Ranchi: Inaugurating schemes worth Rs 467 crore 32 lakh 88 thousand 380 under related to water conservation at the state-level water harvesting center in Nagdi Agriculture Minister Badal said that under the leadership of Chief Minister Hemant Soren, efforts will be made to make the farmers of the state happy. He said that day is a very special one in the history of Jharkhand.

He said that the scheme of pond renovation and percolation tank construction is being launched in the blocks of all the districts of Jharkhand. He said that with the commencement of renovation of 2133 ponds and construction of 2795 percolations in all blocks of 24 districts, the government is trying to lay a strong foundation of water conservation in the entire state. Badal said that efforts are being made continuously by the government to get relief from drought but efforts should be made at the village level as well.

He said that due to the better condition of electricity in the village, irrigation can be arranged smoothly from the pond. In this episode, we have resolved to make the concept of Smart Village a reality. He said that a society can be formed by increasing the number of members of the Pani Panchayat and that committee should be given the responsibility of fish farming in the pond, it is being considered. He said that an advance payment of Rs 3500 per acre per person was being made to the farmers affected by drought through the state fund.

The aim of the government is to ensure 20 percent contribution of farmers in Jharkhand’s GDP. He said that it takes serious hard work to get the schemes on the ground and he has returned from his assembly constituency and inspected the area where the pond is being renovated and after that the implementation of this scheme at the state level will be done.

He said that only farmers can improve Jharkhand’s GDP and the government is ready to provide assistance at all levels. Farmers will soon be strengthened under the Mukhyamantri Pashudhan Yojana. Also, we have made a provision to give two rupees per liter of milk to the farmers. It is our endeavor that the farmers of Jharkhand become prosperous on the lines of Punjab and Haryana, as well as move the state towards assured irrigation. Till now about 31 lakh 33 thousand applications of drought-affected farmers have been received and payment has also been made to 8.5 lakh people.