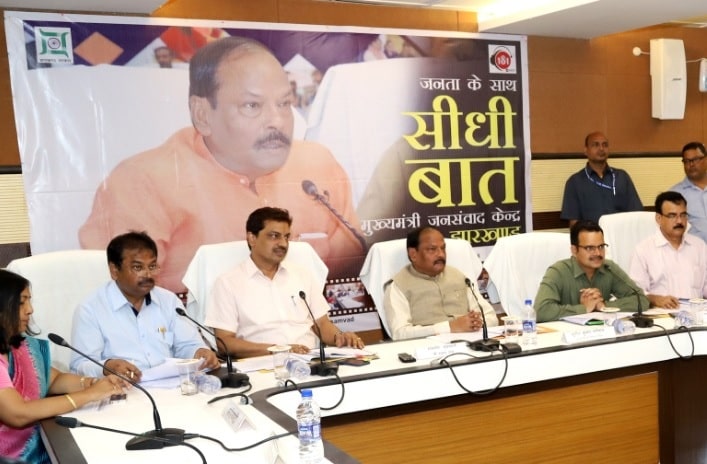 Chief Minister Raghubar Das ordered to make the report available in the CMO by checking all the government buildings which are semi-constructed and vacant by reviewing their present utility. He has sought the report of all the buildings located in the district within a week from the deputy commissioners of all the districts. Manoj Gupta of Hazaribagh raised this issue of semi-constructed minority hostel in Khergaon since 2010, on which the Chief Minister gave this order. The Chief Minister was reviewing complaints in Seedhi Baat program of Jansamvad Kendra at Suchna Bhawan.

Devendra Singh of the Golmuri police line under Eastern Singhbhum district died during service in 2013 but his dependent did not get a job on the basis of compassion yet. On this, the Chief Minister ordered to give an appointment letter within two days and ordered all the departments to review such matters on a priority basis.

Rajesh Kumar complained about the due payment of benefits of retired and dead personnel of Mines Board since 1989. They have been given 70 per cent and for 30 per cent, the Chief Minister asked the Urban Development Department to take high-level decision by checking outstanding claims and pay the amount under the special package.

During the review of a complaint related to non-payment of the amount of Birsa checkdam under the National Agricultural Development Scheme of the Government of India in Koderma district, it came to light that due to not getting amount of Rs. 33 crore from Central Government, payment and construction is pending in the whole state. The Chief Minister ordered the departmental secretary to complete all the pending schemes of checkdam from the state government’s fund till December next.

Banjnath Pradasad complained about destroyed corps in 2013-14 in Rajgunj Block due to poor seeds provided by Packs. For the loss, farmers have not received compensation yet. On this, the Deputy Commissioner said that the FIR will be lodged against the insurance company and recovery will be done. The Chief Minister ordered the immediate payment of the claim amount of Rs 66 lakh to the farmers from amount of guarantee of the insurance company.

Pushpak Kumar Singh of Garhwa district complained about compensation being not paid in the lieu of land of 700 Raiyats which was taken to construct road from Ramna to Manjhiyawa. On this, the Chief Minister instructed the Secretary of the concerned Department and the Deputy Commissioner of Garhwa to pay the compensation till December. Similarly, in the Bhadrakali Mata Mandir area in Itkhori block of Chatra, the issue of non-payment of the compensation by the tourism department was also brought to the notice. On this the Chief Minister instructed the Deputy Commissioner of Chatra to hold a meeting with villagers and ensure payment of all claims.