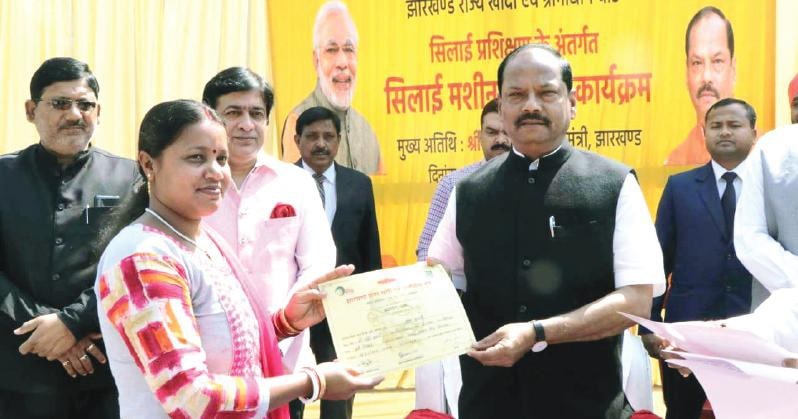 Jamshedpur: Jharkhand Chief Minister Raghubar Das said that women and children of the state are extremely talented and they needed to realize their strength as when they would stand on their feet then only Jharkhand would become prosperous and rich. Addressing a program organised by the State Khadi board here is said that even the Prime Minister has this thought that if the country and the nation has to move forward then women power should be further strengthened and working on his mantra the state  Government is taking the help of the Khadi Gram Udyog board welfare department and other schemes to enhance the skills of the youth women and girls so that Jharkhand has a rich pool of trained manpower and moves further towards economic empowerment.

The Chief Minister said that people from Jharkhand migrate in search of a job which also includes girls where they, unfortunately, become victims of physical and mental exploitation. He said that the government wanted to stop migration and for this, it was providing training to the girls especially those belonging to the tribal and Dalit community and is linking them with jobs and self-employment. He said that skill college in Ranchi has been inaugurated where 350 girls are being provided training in a different trade and 18 pc of these girls are from the tribal and Dalit community and said that many of them have been provided employment in the textile sector. He said that for the 40 lakh children who are studying in the government schools for the school uniforms would be stitched by the trained women so that they can get additional income.

He said that the women should use the sewing machine provided to them in this connection and assured that they would be provided Mudra loans to start their own business and promised all possible help from the side of the government. Mr. Das said that there was the demand of talent across the world and their food the state government was providing training to the young generation as there was a need to bring change in the thought process and said that for being rich one should not have degrees only but need skills also.