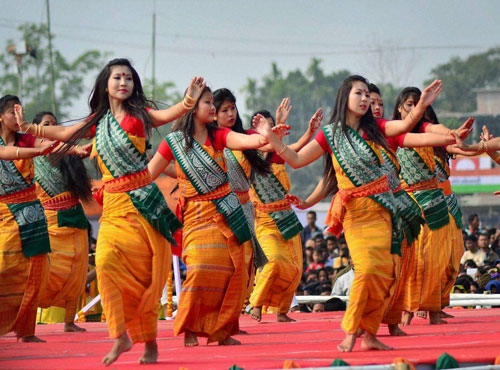 Guwahati: In a small town called Pathsala, about 60 km from this principal town of Assam, a mission has been underway for more than half a century. The task at hand is not easy — revival of the Nati dance of India’s outlawed Devadasi tradition.

Even then, the man behind the mission, Dilip Kakati, is trudging along in his “lonely journey” to restore the lost glory of this ancient dance form of Assam.

Assam’s Devadasi dance is a 1,000-year-old tradition, prevalent since the 7th century when the Devadasi system was in place. Girls were offered to Saiva, Sakta and Vaishnava temples to dance as part of a daily ritual. Ancient texts like the Kalika Puran and Jogitantra carry references to this ritualistic dance practice.

Kakati says that in those times, Devadasis — also known as Natis in the local language — used to remain unmarried while living with their families and attending to the temple services. Apart from that, they were also required to perform outside the temple during certain occasions, such as Durga Puja.

The Devadasi dance’s fall from glory happened around the 17th century when there were repeated foreign invasions and royal patronage receded — forcing the sacred temple dancers into prostitution for survival. By the early 20th century, the British had abolished the system in India.

“In the early 1950s, Ratnakanta Talukdar of Pathsala decided to revive the forgotten Nati dance tradition. He did not belong to any temple dancer’s family. He was an outsider, but under the guidance of the legendary Kalaguru Vishnu Rabha, he dived into this revival mission and found the last two surviving Natis, Kaushalya Devi and Royabala Devi,” Kakati said.

The Natis had very faint memories of the dance they had performed once upon a time, and from what they could remember, a 10-minute performance was put together. But the next challenge was finding young girls whose families would allow them to perform the stigmatised dance form. But Talukdar was successful — he found four girls, one of whom was Dilip Kakati’s sister.

“That is how I got involved in the Devadasi dance revival mission,” the 61-year-old flag-bearer says. The brother-sister duo was at the receiving end of societal rebuke, but they were undeterred. The revival mission had begun.

“When he (Ratnakanta Talukdar) passed away in 1980, the responsibility fell on my shoulders to carry on the mission,” he said.

Ever since, Kakati and his troupe of seven members have been performing the Nati dance on stage in various cultural programmes. As he trains the Devadasi dancers, it is obvious that acceptance of this form is no longer the big challenge. “The challenge now is propagating the pure form of Nati dance,” he said.

According to Kakati, over the years, Nati dance has found other supporters who have been propagating a “remixed” version of the dance form. “There is a Guwahati-based artist, also from Pathsala, who, along with his troupe, has been performing Nati dance across India. He asked me to join him on several occasions but I found a lot of differences in his dance form… it seems to have been tweaked to suit modern tastes,” Kakati said.

“No matter how lonely my journey may be, I will propagate only the purest form of Nati dance, the one that was painstakingly put together from the memories of the original Natis. But I wish the state government extended some support in preserving this dance form,” he lamented.

Kakati’s troupe members — the “khol” (drum) player, the one who plays the “taal” (cymbal), the dancers, including his sister — are a dedicated lot but he is still worried about the dance form’s survival after he is gone. “My children are not as interested… it is therefore heartening when artistes like (Mumbai-based dancer) Prateesha Suresh give a platform for us to tell people about this tradition through discussions and performances.”

“I just hope that after I am gone, there will be someone who will be ready to carry on the beacon of the Nati dance in its pure form and help it regain its lost glory,” he said.