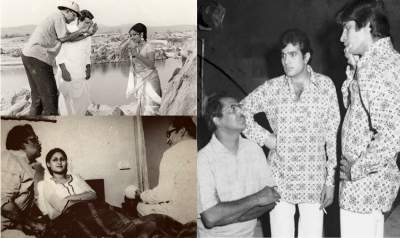 Films, especially of Bollywood, are usually escapist from the uncompromising reality and leverage a willing suspension of disbelief by the viewer for the simulacrum of our world they create.

However, this accomplished Indian film-maker was adept in making movies that recreated the ethos and concerns of the middle class, which seemed like their own experiences, not a contrived story.

Hrishikesh Mukherjee eschewed formulaic ‘masala’ potboilers (with plenty of flailing fists, sultry beauties and unspeakable villains or those of love triangles and misunderstandings) or intense “art movies”, to create a unique “middle-of-the road” and popular films – wide-ranging and even provocative – but also guaranteed to touch you.

He was also deft in using established stars against their typecast images – heartthrob Rajesh Khanna in a deglamourised role of a terminally-ill but still cheerful patient and later, as a humble cook with a secret agenda, action man Dharmendra displaying his sensitive side as a man of principle who meets a tragic end, and in another film, his comic genius in a gambit to show up an uppity relative, and Amitabh Bachchan – well before he became a household name – as a cynical doctor, and then, as an insecure and jealous singer.

Mukherjee, who would have turned 100 on this day (September 30), only made 42 films in a four decade-odd career – with a ten-year hiatus between the second-last and the last – but they stand out for their insightful look into believable human problems and foibles, prosaic but edifying themes which never transgressed into preaching or agendas, lively music, and generous helpings of humour (whenever apt).

They also easily swung across genres, created some of the most memorable characters seen onscreen (remember Dhurandar Bhatawadekar?), and reprised plots and motifs in various innovative ways – an incident sad and poignant in one, and flighty and humorous in the next – using the same actors, eg. Dharmendra and Sharmila Tagore in “Satyakam” and “Chupke Chupke”.

Part of this can be attributed to his background. A chemistry graduate from the University of Calcutta and a science teacher too, he chose a career in films, working first as a cameraman, and then as film editor, in New Theatres in the late 1940s. He then worked with Bimal Roy in Mumbai as film editor and assistant director from 1951, before branching out as an independent filmmaker towards the end of the decade.

His skill as editor and focus on the script, as many of those who worked with him attest, helped to ensure the finesse in his films – most scenes were shot in two or maximum three takes.

While Mukhejee is best known for the rather sombre “Anand” (1971), and the laugh riots “Chupke Chupke” (1975), and “Gol Maal” (1979), he had a wide and varied repertoire – right from his debut “Musafir” (1957), which was not only of the first “portmanteau” film, comprising three separate episodes linked by a single theme, but a casting coup in being the only film to star Dilip Kumar and Kishore Kumar.

However, it was not successful commercially and he only hit the limelight with his second outing “Anari”, which transformed Raj Kapoor’s Chaplinesque persona to a more believable avatar and fetched the showman his first Filmfare Award for acting.

These were followed by the sensitive and ahead of its time “Anuradha” (1960) with Balraj Sahni and Leela Naidu, the effervescent “Asli Naqli” (1962) with Dev Anand and Sadhana, the enigmatic “Sanjh Aur Savera” (1964), where Guru Dutt, in his final screen performance, was paired with Meena Kumari, “Gaban” (1966), starring Sunil Dutt, and possibly one of the best screen adaptations of a Premchand work, the morbid “Satyakam” (1969) with Dharmendra in his most unusual role, among many others.

However, it was Chatterjee’s work in the 1970s that comprises some landmark Indian films – While “Anand” came out in 1971, so did “Guddi”, where Dharmendra, who plays himself, teams up with a young Jaya Bhaduri’s uncle (Utpal Dutt) to acquaint her with the reality of the film industry, “Bawarchi” (1972) where Rajesh Khanna cooks up concord and understanding in a fractious family, “Abhimaan” and “Namak Haraam” (1973), the Wodehousian “Chupke Chupke” (1975), and then “Gol Maal” (1979), where the Amol Palekar and Utpal Dutt chemistry was stupendous.

However, it was by this time, he seemed to lose steam and though he worked till the end of the decade, the usual sparkle was lacking with the changing mores and norms and most of his actors going back to doing what they were better known for. He emerged in the end 1990s with “Jhooth Bole Kauwa Kaate”, starring Anil Kapoor, Juhi Chawla and Amrish Puri, but this was his swan song, ahead of his death in 2006.