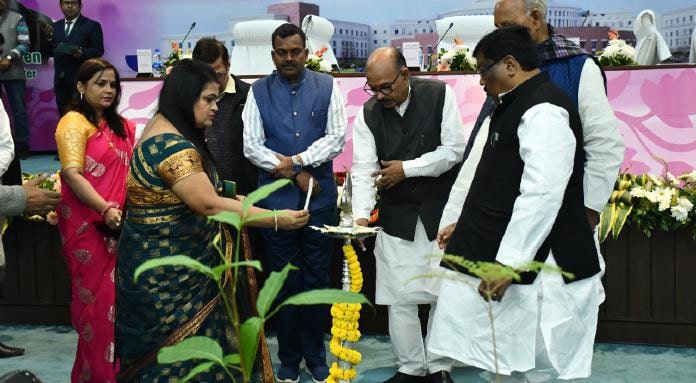 Ranchi: A National Conference on ‘Centre-State Relations was organised by the Jharkhand Vidhan Sabha along with the National University of Study and Research in Law, Ranchi and PRS Legislative Research, New Delhi, as part of the 22nd Foundation Day celebrations of Jharkhand State Legislative Assembly. This is the first time in India that such an academic initiative is being taken up by a Legislative Assembly in collaboration with National Law University.

The purpose of the Conference is to deliberate upon the federal structure of India as envisaged by the Constituent Assembly, structured in the Constitution of India and the current state of affairs of the Centre-State relations. Speaker, Jharkhand Assembly Ravindra Nath Mahto while introducing the history and geographical importance of the State of Jharkhand, set the objectives of the National Conference.

The Speaker stressed the point that these 73 years of independent India saw ups and down in centre-state relations and the Constitution of India stood the test of time. Referring to the verdict of the Supreme Court in Kesavananda Bharati case Speaker said federalism is part of the basic structure of the Constitution and it is the duty of all of us to let the federal set-up of our country by successful. He also said that states shall be permitted to act within their sphere without any interference from the centre.

He hoped that the National Conference will address the key issues raised in contemporary India with reference to Centre-State relations. Prof (Dr) Kesava Rao Vurrakula, Vice Chancellor, National University of Study and Research in Law, Ranchi introduced all the speakers of the National Conference and said the academic deliberations are the basis of the evolution of law and policy. He thanked the Jharkhand Assembly for coming up with such idea of bringing up academicians and legislators together.

Referring Jharkhand Legislative Assembly and the National University of Study and Research in Law, Ranchi as sharing father and son bonding, he reminded that the birth of the University through the State Legislative Act. Ten crucial aspects of the Centre-State relations were part of the deliberations in the National Conference.

All the speakers agreed to the point that the Constitutional makers framed federalism which is titled towards centre, but adequately ensured the role of States in the governance and administration. Our constitution shall strive to be organic, living and dynamic with regard to centre-state relations, by bringing out a healthy and harmonious environment. Development of the nation is concentrated on the growth of all regions and development at the regional level is with the States.