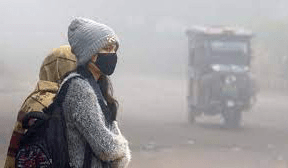 According to weathermen, another western disturbance is likely to affect the western Himalayan region from the night of January 20 and adjoining plains from January 22. On several parts of the state on Tuesday woke up to gloomy weather with overcast conditions coupled with dense to moderate fog at some places.

The fog cover reduced surface visibility at several places in northern and southern Jharkhand. Weathermen said dry weather conditions would prevail in Jharkhand and ruled out the possibility of rains in the next few days. The forecast of Ranchi Met Centre suggests fog and mist with a partly cloudy sky for the next three to four days.

The minimum reading hovered between 9-10 degree Celsius at Ranchi, Daltonganj, Giridih, Bokaro and Simdega while Jamshedpur and its adjoining areas were warmer at around14-15 degree Celsius. Weathermen said the day temperature in several districts would witness a fall due to the cloud cover.