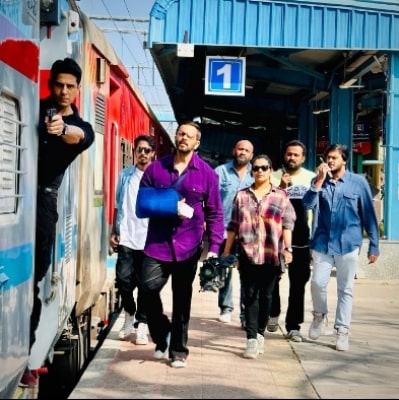 He posted a picture from the sets in which Sidharth can be seen in action mode with a pistol in his hand inside a train while Rohit is seen standing with his crew behind him at the station.

He wrote in the caption: “Shooting a train action sequence reminds me of Chennai Express days.”

‘Chennai Express’ which was released in 2013 was among the most successful films and follows the story of Rahul Mithaiwala and how his life goes upside down while travelling on a train to immerse the ashes of his grandfather. Now, while shooting for an action sequence, Rohit remembered his shooting days from the sets of his film.

The filmmaker also recently got injured while shooting a car action sequence on the sets in Hyderabad and he informed the fans through his post. Rohit’s upcoming web series ‘Indian Police Force’ features Sidharth Malhotra in the lead role along with Vivek Oberoi and Shilpa Shetty.

Rohit is known for his action drama and cop series like ‘Singham’ which was released in 2011 and its sequel ‘Singham Returns’ came in 2014.

As per the media reports, Deepika Padukone has joined the cast of ‘Singham Again’. It also features Bollywood actor Ajay Devgn.