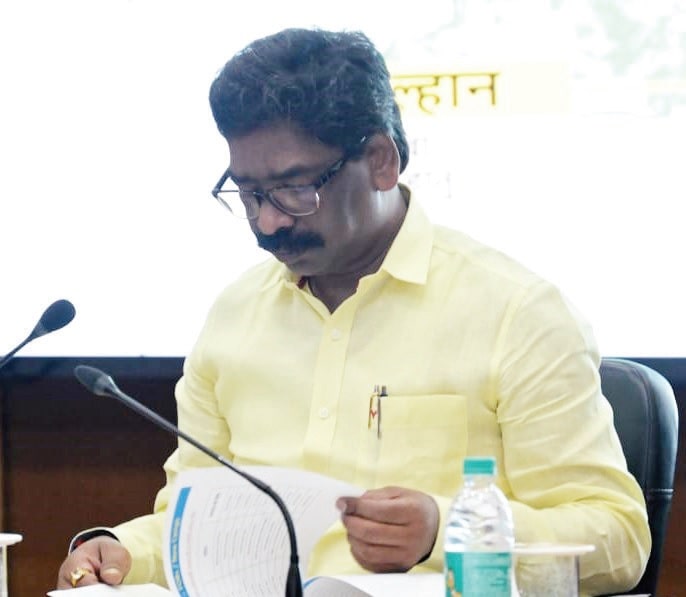 Ranchi: Chief Minister Hemant Soren said that maintaining law and order in the state is the top priority of the government and especially insurgency and criminal incidents should be curbed at all costs so that a fear-free environment can be maintained.

The Chief Minister while holding a high-level meeting with the Superintendents of Police of all the districts in the presence of senior police officers reviewed various issues related to law and order and maintenance of law and order including extremism and crime control.

The Chief Minister said that in the Maoist-affected areas including Budha Pahad, Parasnath and Saranda the benefits of the government’s schemes should be given to the villagers by setting up camps in the presence of the police. Along with this, basic facilities like electricity, water, roads should be also provided here as this will increase the credibility of the people towards the police and will help in controlling the extremist incidents with the cooperation of the general public.

The police officers told the Chief Minister that by running a civic action plan in the Naxal-affected areas by the security forces, the needy items are being continuously provided to the people.

The Chief Minister said that insurgency-affected areas can be curbed to a great extent by connecting the villagers, especially the youth with employment. He told the police officers that they should take the items needed by the security forces deployed in the rural areas from the villagers as by getting employment income will also increase.

The Chief Minister said that the government would provide whatever is needed for this in due course of time. He said that if there is a need to build a road and a bridge-culvert in the LWE-affected areas then the complete mapping of it should be done and report it to the government as the security forces should not face any difficulties.

He said that complaints are being received continuously by many criminals lodged in jails for carrying out criminal incidents through mobile or other means and this should be stopped at all costs.

The Chief Minister gave clear instructions to the police officers that the process of installing jammers in all the jails of the state should be completed within a month.

The Chief Minister said that the festive season is starting in a few days and this time Durga Puja is happening on a large scale which is likely to attract huge crowds in such a situation the entire state should be on a high alert till December and strong security arrangements should be made.

He said that to maintain peace and harmony, the police should take all necessary and concrete steps. Chief Secretary Sukhdev Singh, DGP Neeraj Sinha and others were present on the occasion.