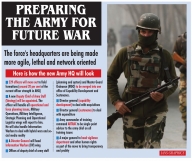 New Delhi (IANS) Nearly 20 per cent of the officers posted in the Army headquarters will be shifted to field areas as the government has approved all the recommendations of a panel formed last year to reorganize the nerve centre of the force to make it more agile, lethal and network-oriented to face future wars.

The exercise will immediately make 229 officers of various ranks posted in army headquarters available for field formations. The Army headquarter will have a new deputy chief of army staff (strategy).

The officer will have the most significant positioning as he will handle all operational and force planning issues with military operations, military intelligence, strategic planning and operational loigstics branches reporting to him.

In other significant change accepted by the MoD is the merging of deputy chief (P&S) and Master General Ordnance (MGO) into a single entity to be called deputy chief (capability development and sustenance). The office will handle the Army budget.

Army’s training command in Shimla will now be sole adviser to the Army Chief on all the matters related to training.

Two new dedicated branches to deal with transparency and probity have been added to be headed by major generals dealing with vigilance and human rights.

The Army HQ reorganization study was commissioned by Army Chief General Bipin Rawat and the Ministry of Defence (MoD) has accepted all the recommendations.

Preparing army for the future war, the force’s headquarters is being made more agile, lethal and network-oriended

Here is how will the new Army HQ look like:

* A new Deputy Chief of Army Staff (Strategy) will be appointed. The officer will handle all operational and force planning issues.

* Military Operations, Military Intelligence, Strategic Planning and Operational Logistics wings will report to him. He will also handle Information Warfare to deal with hybrid wars and social media reality