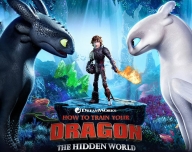 New Delhi (IANS) “How to Train Your Dragon: The Hidden World” will open in theatres in India on March 21, the same day as Akshay Kumar-starrer “Kesari”.

The story of the series began as an unlikely friendship between an adolescent Viking and a fearsome Night Fury dragon. Now chief and ruler of Berk alongside Astrid, Hiccup has created a gloriously chaotic dragon utopia.

When the sudden appearance of female Light Fury coincides with the darkest threat their village has ever faced, Hiccup and Toothless must leave the only home they’ve known and journey to a hidden world thought only to exist in myth.

Series director Dean DeBlois has returned for “How to Train Your Dragon: The Hidden World”.

The film has voice-overs by actors Jay Baruchel, America Ferrera, Cate Blanchett and Kit Harrington, among others.