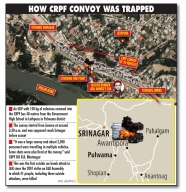 Srinagar/New Delhi (IANS) The Valentine’s Day isn’t a very popular event among the forces, yet for over 2,500 men of CRPF’s 76th Battalion returning from leave to join duty in Srinagar, the bus ride from Jammu starting as early as 2.33 am was to be memorable — which turned most tragic as events unfolded in a few hours.

CRPF sources say it is uncommon for the Central Reserve Paramilitary Force (CRPF) to send a convoy of 78 vehicles (16 were added when it reached Qazigund, around 2.15 p.m.) through almost deserted streets. From the security point of view, it was to be a perfect setting; there had been virtually no traffic on the Jammu-Srinagar Highway because of bad weather for the last couple of days. The convoy was only an hour away from the disaster — around 60km from Qazigund, at Lethpora in Pulwama.

It appears the convoy’s security was a given – almost. A CRPF’s Road Opening Party (ROP) was supposed to sanitize the highways through physical checks every morning for presence of Improvised Explosive Devices (IEDs). The Army dominates the areas, and there are always Quick Reaction Teams of forces available on the highways.

As the convoy reached Lethpora, just 27 km short of Srinagar, an explosive-laden car which was apparently following the convoy rammed into the fifth bus from the left side. A second bus was also hit in the blast. Gunshots were heard in the area, but no one knew as to who fired. The toll now stands at 49 dead and at least a dozen injured.

A CRPF man, who was traveling in the convoy, said the massive blast stunned all. “There was total mayhem and confusion — all I could see was thick smoke”.

“We were told to stay back in our vehicles as ROP was in place,” a CRPF trooper said. “We got to know about the deadly blast when I received a WhatsApp message. As we got down we saw the mayhem – badly mutilated and burnt limbs of our colleagues and a smouldering fire. We were taken immediately to a nearby camp.”

Soon after the deadly blast Pakistan-based Jaish-e-Mohammed, claimed responsibility for the attack. It said that one of the local fidayeen Adil Ahmad Dar, from south Kashmir’s Pulwama district carried out the attack. The group also released a recorded video statement of Dar and by the time video was released on social media, the 21-year-old was dead. Dar had joined militant ranks less than a year before.

Sources in the National Investigation Agency (NIA) probing the attack say Dar might have used 150 kg of ammonium nitrate (often called Super 90) – a fertilizer which is often used in low-intensity blasts. Though the investigation is only at a preliminary stage, NIA sources do not rule out the possibility of RDX or a mix of the two explosives being used in the Pulwama attack.

This was the first suicide car bomb attack in Kashmir since the 2001 strike on J&K Assembly in which 41 people, including three suicide attackers, were killed.