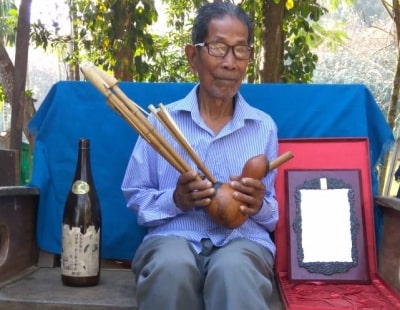 Agartala (IANS) Poverty has not stopped nonagenarian Thanga Darlong — all of 91 years — from playing the rosem, a flute-like tribal musical instrument made of bamboo. This labour of love saw him nominated for the Padma Shri, India’s fourth highest civilian award, in the Republic Day honours list.

The unlettered musical genius, who hails from the remote Muraibari tribal village in northern Tripura’s Unakoti district, learned to play the rosem from his father, Hakvunga Darlong, and was later groomed by his uncle, Darthuama Darlong. It’s been a journey that has lasted for over eight decades.

Thanga Darlong, the father of four sons and four daughters, receives only Rs 700 per month from the social welfare department as a grant.

“My grandfather, father and uncles are unable to do farming due to various reasons including illness and non-availability of suitable land,” Thanga Darlong’s grandson Talnghninga Darlong, told IANS, adding: “Despite having to often starve and his advanced age ‘dadu’ (grandfather) devotes a few hours every day to playing his rosem.”

“I am greatly honoured that the central government announced my name for the Padma Shri award,” a hearing-impaired Thanga Darlong told IANS.

“It is extremely regrettable that the young generation of our Darlong community and other tribal communities do not play this instrument and this could cause its demise,” he said.

Darlong is a sub-tribe of the Kuki community and and its members, who number over 9,000, are largely Christians.

“The Darlongs mostly live on hilltops. They are fond of music and dance and work hard as ‘jhum’ (slash and burn) cultivators and also grow fruit. Now-a-days they do farming in the plains and raise livestock. They speak a language which is closely related to the Kuki-Chin linguistic family of the Sino-Tibetan race,” writer and researcher Pralayendu Chowdhury told IANS.