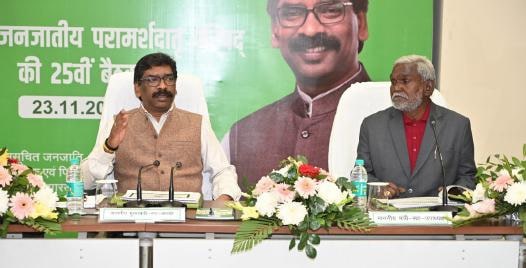 Ranchi: The members of the Tribal Advisory Council (TAC) of Jharkhand lodged their protest after a single post of the local bodies was de-reserved in the proposed local bodies’ poll. The meeting was chaired by Chief Minister Hemant Soren.

All the members raised this issue during the meeting,” said Congress MLA Rajesh Kacchap. The agenda of TAC included 11 points. It was decided that ecotourism should be promoted in Jharkhand to preserve climate and tribal culture. It will further promote the state on national and internal tourism maps. The members advised that there should be proper marketing and branding of forest products by Sido-Kanhu Agriculture and Forest Produce State Cooperative Union Limited.

They said that steps should be taken to ensure that people dependent upon minor forest products get income. They said that under the Forest Rights Act 2006, tribal communities should be given community land leases in forest areas in accordance with the rules.

The meeting thoroughly discussed a roadmap to promote tribal languages from classes 1 to 5. It was decided that Dr. Ramdayal Munda Tribal Welfare Research Institute would frame the policy for the same and textbooks would be translated in tribal languages. The matter of the appointment of teachers for tribal language was also discussed.

The members also gave several suggestions which were discussed at length. There was a proposal to hand over the operation of the newly renovated Bhagwan Birsa Munda Museum to the Tribal Research Institute. Congress MLA Shilpi Neha Tirkey demanded the immediate appointment of a chairperson of the State Women’s Commission.

She also raised the issue of people facing problems in fetching their PDS due to poor networks. She said that across the state there are as many as 600 PDS dealers who have poor mobile networks which hamper the distribution of PDS.