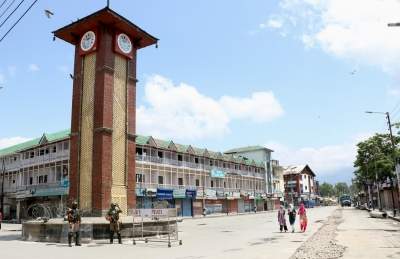 Srinagar (IANS) For over seven decades since India’s Independence the fate of the people of Jammu, Kashmir, and Ladakh was in the hands of a few powerful political families living in the region. They gave the world an illusion that Kashmir was a democratic free market while they quietly governed like oligarchs.

The rich and powerful built mansions across the world with money sent by New Delhi for public welfare. The disgusting underbelly of the state was known to all through this time. And finally on August 5, 2019, the Centre abrogated the Article 370 and Article 35A of the Indian Constitution that honoured J&K with a “special status” — merely a protection to the powerful to continue deals with the devil while the poor loomed in misery and starvation.

Today an average man of J&K is overjoyed with the wave of developments brought in by the Centre. The dissolution of power of the few mighty and its distribution to the people has broken the shackles that kept J&K from peace and normalcy.

The historic, futuristic, and all-inclusive Rs 1,12,950 crore budget for the year 2022-23 reflects the needs and aspirations of the people of UT, and the Centre’s commitment to peace, progress, and prosperity of J&K. Good governance, agriculture and horticulture, power sector, rural development, strengthening grass-root democracy, facilitating of investment and industrial growth, infrastructure development, improving road connectivity, broadening social inclusion, Har Ghar Nal Se Jal, education, quality of life for youth, tourism, and health and medical education are the highlights of the budget.

There was a time when people were terrified of visiting J&K given the political scenario. Today a new story of development is being written. Foreign investors from the UAE are investing heavily in Healthcare, Horticulture, IT, Infrastructure, and Food Processing. J&K is going through a major physical makeover. The UT received $2.5 billion (approximately Rs 18,568 crore) in investments from the Gulf in January and is expecting to attract 70,000 crore worth of investment by the end of the year.

Now industrialists are cashing in on the UT’s potential as a young economy. Paired with the industrious youth of the state, this monumental wave of development will have a catalytic effect in driving the trade and commerce growth of J&K.

Today women are at the forefront of all entrepreneurial initiatives in Jammu and Kashmir Union Territory. Lakhs of women across the UT are utilising the Centre’s schemes meant to encourage self- sufficiency through interest-free loans, subsidized raw materials, free skill coaching programmes, and other monetary and vocational training benefits.

Up until three years ago, women participating in the upliftment of the rural economy was unheard of. Government initiatives like SAATH, HAUSLA, UMEED, and TEJASWINI have created a culture, almost a need for the financial independence of rural women. Usually, people in remote and rural areas are agriculture dependent; their employment is seasonal and that gives them a lot of idle time.

The Centre is aiding the women with the necessary technical know- how and marketing tools for their small businesses. Many women who started from their homes have opened up hands-on learning centers. Today 5 lakh women are a part of 56,000 Self-Help-Groups in the UT. In 2022 assistance and support will be extended to an additional 1.5 lakh women entrepreneurs.

The number of Kashmiri youth joining terrorist outfits has dropped by more than 40 per cent since August 2019. Earlier, the local government spent taxpayers’ money and held “peace talks” with our rogue neighbours for years while Pakistan slow-poisoned the Valley with drugs and indoctrinated the gullible minds with false interpretations of Islamic teachings.

In Budget 2022-23, the Finance Minister allocated capital expenditure of Rs 312.57 crore for youth-related activities in the Union Territory. To boost self-employment opportunities, Rs 200 crore has been categorically provisioned under the “Mission Youth Programme” under which private-sector job fairs and training will be imparted to youth to build an entrepreneurial environment.

Schemes under Mission Youth include Mumkin, Tejaswini, Rise Together, Tourist Village Network, SAYTHA-Youth in Distress, AVSAR, Skill Development Initiatives, Youth Clubs, Psycho-Social Support, and Young Innovators Programs for holistic and pragmatic youth engagement and empowerment on sustainable lines. Given the spirited entrepreneurial and initiative-driven climate in the JKUT, the Center is giving another life to youth that earlier found themselves directionless. Motivators who lured young boys into militancy are being tracked and busted.

Before August 2019, Panchayati Raj Institutions (PRI) in J&K were castles in the air. Today the PRI is integrated with the government and its representatives are the people’s voice. In the last three years, Rs 2,000 crore has been funneled for schemes that aim to benefit every man to the bottom of the hierarchy. For the first time since Independence, elected representatives of the panchayats have been given powers to audit, address grievances, and take action for the people on their own accord. The Back to Villages programme of the J&K government ensured transparency in the allotment of funds and execution of the government’s developmental work.

After J&K’s transformation into a UT, the Right to Education Act has allowed children access to quality education without discrimination. Now more than ever, the neglected sections of society especially the tribals and bakarwals are enrolling in schools. This year the Education Department and the Indian Army took it upon themselves to set up makeshift schools in the higher altitudes of the UT (where the migratory bakerwals spend a few months of the year) and volunteered to teach the children.

Refugees from West Pakistan were always seen as second-class citizens and reduced to the status of a beggar. But with the abrogation of Article 370, they now can avail the benefits of Central Reservation for Scheduled and Other Backward Castes. The marginalised finally have an identity.

A similar plight was that of the Valmiki community who were brought to the erstwhile state of Jammu and Kashmir to end a union protest and clean the streets in 1957. They were never given the PRC

(Permanent Resident Certificates) and their children were denied admissions to schools and employment in services. Their 63-year- long battle ended with the revocation of this special Act. They no longer are forced to work as sanitation workers and can choose to live with equal opportunity as others in J&K.

Before 2019 if a woman married a non-resident of the state, she would lose her property ownership rights. Article 35A also gave the J&K government the right to decide who qualifies for the “permanent residency”, based on which land can be bought, government jobs in the state can be applied for, etc. While J&K residents would cherry- pick the best (and multiple) locations across the Indian subcontinent to buy property, conduct businesses, and settle? Where was the justice and equality in this for the rest of the nation?

The Prime Minister’s Naya J&K (post August 2019) has superseded the expectations of everyone. The Centre has won the hearts of people. A common man can make a clear distinction between fake narratives of the previous government and tangible results delivered by the Centre in three years. No one is shouting the slogans of self- autonomy or Azadi on the streets. The era of opportunities, peace, and prosperity has replaced the era of deceit, lies, and discrimination.