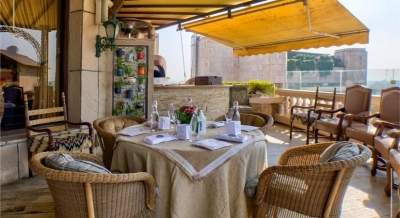 New Delhi (IANS) Embodying the ethos of ‘Responsible Luxury’, ITC Hotels, the world’s largest chain of hotels with the maximum number of LEED Platinum Certified Properties, has been accorded yet another distinction by the USGBC (United States Green Building Council), making ITC Windsor, Bengaluru, the first hotel in the world to achieve the LEED Zero Carbon Certification.

LEED Zero encourages a holistic approach for buildings and places, which will contribute to a regenerative future. Sharing the same vision, ITC Hotels’ decade strong “Responsible Luxury” initiative seeks to adopt the highest standards of planet positive experiences in its operations.

ITC Windsor is powered by its own wind turbine generators and uses innovative energy efficient technologies such as an electrical boiler, induction burners and other renewable energy. The hotel is a stellar example of how hospitality can make a positive global impact by committing to sustainability and achieving net zero carbon status.

ITC Windsor’s best practices on sustainability and focused approach to furthering its green eco-system has credited it with the defining distinction of becoming the first hotel in the world to be LEED Zero Carbon certified.

The LEED Zero carbon certification demonstrates a deep commitment to implementing building and design strategies that assure an enhanced quality of life. It includes creating an environment where any human-produced carbon dioxide is removed from the atmosphere through technological or natural means.

Nakul Anand, Executive Director, ITC stated: “The ITC Hotels growth story is a story about sustainability. We strongly believe that any effort to save the planet ultimately equals to saving ourselves. Elevating the role of buildings in mitigating climate-related risks and halting resource depletion is critical in achieving a sustainable and regenerative future for all.

“At ITC Hotels, we understand the value of going beyond efficiency and have showcased extraordinary sustainability leadership by enhancing the renewable energy footprint, energy efficiency and mitigation of greenhouse gases emission. Innovative net zero projects such as ITC Windsor are aligned to India’s vision of significantly cutting emissions, and are a critical driving force behind the transformation of buildings, cities, and communities so that they continue to sustain future generations.”

ITC Hotels has pioneered several ground-breaking initiatives on environment, hotel ecosystem, health, and well-being. From LEED platinum rating, to being one of the first chains to eliminate single use plastic free products, deployment of radiation harmonisers across the chain, farm to fork low carbon footprint cuisine, clean air and more.

“At USGBC, we believe net zero is a powerful target that will move the entire industry forward. It influences the rest of the industry to aim even higher and achieving LEED Zero certification demonstrates these goals are attainable,” said its President and CEO Mahesh Ramanujam.

“Given the climate-related risks we are facing and the central role buildings play in climate mitigation, ITC Windsor’s LEED Zero certification for carbon demonstrates visionary leadership because it contributes toward a regenerative future and represents a commitment to making the world a better place. By prioritising net zero carbon, ITC Windsor is pioneering a new way forward for the industry as a whole,” he added.

For more than two decades, LEED has provided a framework for creating high performance green buildings and spaces and is an internationally recognized symbol of excellence. Building on that work, the USGBC has developed LEED Zero, a complement to LEED that verifies the achievement of net zero goals. LEED Zero represents a new level of achievement in green building that is not just attainable but is the goal of LEED certified projects around the world.