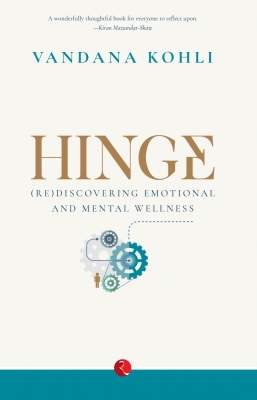 New Delhi (IANS) Mental health rides on how we feel, and our emotions, in turn, are considerably shaped by socio-cultural norms. Thus, our early environment is crucial to the clues we take for anger an indignation, love and fear, says filmmaker and writer Vandana Kohli with an interest in the human mind, behaviour and efficiency in her book “Hinge — (Re-discovering Emotional and Mental Wellness”, suggesting the mastery of five elements to maintain a correct balance.

“Of course, our physical attributes and gender also contribute to how we feel about ourselves whether we are sure or tentative, at ease or not. These affect emotions and their circuits as well,” writes Kohli, who has been educated in Film, History and Commerce at India’s top institutions, winning awards at each of them, and has majored in film editing at the FTII.

To this end, through 14 essays — in three sections — the author focus on hinges of emotional and mental wellness, exploring how the inner may fragment and what may help (in addition to medication, where necessary) in making it whole again — the five elements to correct the imbalances.

Section I considers what is largely the ecosphere of ‘normal’. Narratives are drawn from the middle strata of society — joint family to 40 to a nuclear family — where the means of living are in place. The search is for factors, which, within the scope of normal, could rouse disquiet in a person who may otherwise be well.

Section II examines social and psychological triggers to our emotions that cause inner strain and distress. It explores the power of emotions and how they work to affect the mind and body, and, in the author’s belief, to ‘unhinge’ them from innate equipoise — or the balance of forces or interests.

Section III considers what within us, when processed, may shift to hinge us back again to a sense of onward flow, which is stable and centred.

After this erudite exploration, the author presents the five elements that can take us towards an inclusive reasoning.

The first of these is the courage to confront.

“Courage is a surge towards uncovering the truth, to cut through illusion. It hails from the heart. The ground of the heart, by default, looks to rejoice in truth and beauty. This is why our natural reaction to untruth is so angered and pronounced. We innately seek truth and instead, when we come up against dishonesty, manipulation and falsehood, we are given to rage. Yet, to see the truth, to see things the way they are, takes the surge of courage,” Kohli writes.

Hyphenated with courage is humility, “to face what is fact”.

“To accept both polarities, to gather them further, lies in the heart. A clear warm reason offers release from guilt and rage. From being conscious of one’s own folly, to accepting another’s truth and allowing for its susceptibilities before confronting it — all take courage and a measure of humility,” Kohli writes

Flowing out of courage and humility is the third factor, truth.

“It takes courage, not to confront, but first to honour the other’s truth regardless of how inappropriate and different it may seem to us.

“This is not to condone the act in any way, but to separate the person from the deed. Such separation keeps us away from hatred, which blinds and binds us to destruction. Hate convolutes the chance for constructive action. Honouring the other’s truth frees us from the negativity of aversion or malice. It puts the brakes on us getting pulled into the twister of another’s darkness, from everyone in effect spiralling out of control.

“Further, we are released from the viciousness of anger,” Kohli writes.

The fourth element is need to overcome the ego and the realisation that “the heart of things dark rests in the light, a little black spot in the white sphere of the yin and the yang. It emphases the inherent bridge between darkness and light, hate and love. All things dark are in want of love. Rage, resentment, violence and malice arise from the ego’s powerful desire for validation and attention. Deeper within, there is hunger for acceptance and appreciation”, Kohli states.

“Those amongst us who recognise this fact in our story, draw on courage to move on from it, and not given in to the self-absorbing cry of the ego. We may feel the ego’s plaintive, wistful pang, but may put it to use in being sensitive towards the origins of another’s pain,” Kohli writes.

And finally, there is the centre — or the Buddha’s Middle way — “which is not a compromised zone of gray” but a “centre with emphasis on balance”.

“The centre, by its definition, is away from extremes. Thus, wilfully abandoning the pull of the extreme takes us toward the centre and the balance.

“Such balance is not a tight line to walk on. Nor is it another dread ridden exercise for us to muster great strength to perform,” Kohli writes, adding: “The centre thus tempers conflict. Stable emotions allow us to adapt, continuously. Because we aren’t consumed by the flux of the extremes within, our attention is accessible for us to do other things.”