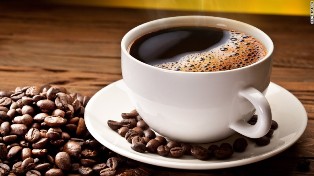 Are you an ardent coffee or tea lover, but advised to avoid caffeinated beverages due to your heart conditions Cheer up, drinking upto three cups of coffee or tea a day is safe as well as reduce irregular heartbeat and stroke risk, a study says.

A single cup of coffee contains about 95 mg of caffeine. It acts as a stimulant to the central nervous system and works to block the effects of adenosine — a chemical that causes atrial fibrillation (AFib).

AFib is the most common heart rhythm disorder, causes the heart to beat rapidly and skip beats, and if left untreated, can cause strokes.

The results suggest that caffeine intake of up to 300 mg per day may be safe for arrhythmic patients.

“There is a public perception, often based on anecdotal experience, that caffeine is a common acute trigger for heart rhythm problems,” said lead author Peter Kistler, Director at Melbourne’s Alfred Hospital.

But, “caffeinated beverages such as coffee and tea have long-term anti-arrhythmic properties mediated by antioxidant effects and antagonism of adenosine,” he added.

For the review, published in the journal JACC: Clinical Electrophysiology, the team analysed multiple population-based studies.

A meta-analysis of 228,465 participants showed that AFib frequency decreasing by 6 per cent in regular coffee drinkers, and an analysis of 115,993 patients showed a 13 per cent reduced risk.

Another study of 103 post-heart attack patients who received an average of 353 mg of caffeine a day showed improvement in heart rate and no significant arrhythmias — or abnormal heart rhythms, that cause the heart to beat too fast, slow or unevenly.

However, in two studies, where patients drank at least 10 cups and nine cups of coffee per day, showed an increased risk for ventricular arrhythmias (VAs) — a condition in which the lower chambers of the heart (ventricles) beat very quickly.

On the other hand, patients with pre-existing heart conditions who consumed two or more energy drinks — that contains concentrated caffeine — per day reported palpitations within 24 hours.