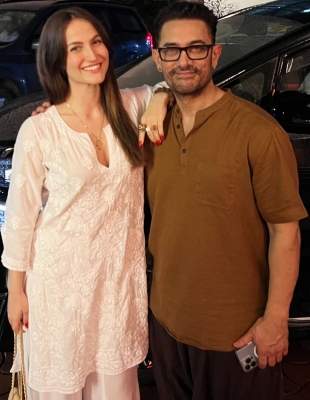 Taking to Twitter to post her views on the yet-to-release film, Elli, who posted a picture of herself with Aamir Khan, said: “‘Laal Singh Chaddha’ – A beautiful innocent emotional movie you feel like watching again because it’s so good!! All the very best and lots of love to Team Aamir Khan Productions.”

‘Laal Singh Chaddha’, which is the remake of the Hollywood blockbuster ‘Forest Gump’, features apart from Aamir Khan, Kareena Kapoor, Naga Chaitanya and Mona Singh among others. The film is being released in Tamil Nadu by actor and politician Udhayanidhi Stalin’s Red Giant Movies.

Meanwhile, post production work on Elli’s first Tamil film, ‘Naane Varuven’, which is being directed by none other than Selvaraghavan, is going on at a brisk pace. Director Selvaraghavan, who is also the elder brother of Dhanush, posted pictures of himself at the studio where post production work on the film was in full swing. The director also informed his followers that music director Yuvan Shankar Raja was giving the final touches to the film’s album.

The film has triggered huge expectations as Dhanush and Selvaraghavan are working together on a film after almost 11 years.Dhanush plays double action in the film, which has been by and large shot in Ooty.

Sources close to the actor say that the film is about a dejavu feeling experienced by two similar looking individuals.