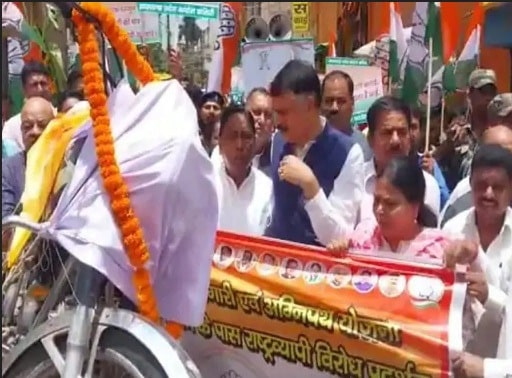 Ranchi: As part of its nationwide campaign the Jharkhand unit of the Congress party on Friday staged gherao of the Raj Bhawan on the issues of price rise and inflation during which the party leaders also got themselves arrested.

The agitation programme was led by JPCC Chief Rajesh Thakur and leader of legislature wing Aalamgir Aalam in which other cabinet ministers in the state government MLAs and senior leaders of the party participated. The party leaders took out a march from the state headquarters of the Congress which moved via Kutchury Chowk and reached the Raj Bhawan. Near the Raj Bhawan, the party leaders courted arrests and were taken to the camp jail at Morhabadi.

On this occasion, State President Rajesh Thakur said that due to the wrong policies of the Central Government the people of the country are facing record-breaking inflation in adverse conditions,  unemployment is at its peak, and people are suffering while the Central Government is paying least attention to these issues.

Further, he said that the government is Constantly running away from debate in Parliament and is trying to suppress the voice raised against the falling rupee, and unemployment, by misusing the central agencies to tarnish the image of the Leaders of the Opposition.

In the ongoing session, the Leader of the Opposition is being summoned by the ED he said adding that by sending the ED to raid the Herald House, the Modi government has shown that it can go to any extent for the politics of vendetta. They think they can divert people’s attention from the failures of BJP.

Congress leader Legislature Party leader Alamgir Aalam said that the central government is targeting the opposition to remove it and stop from raising its failures like rising inflation, unemployment but the Congress will not shy away from its responsibility towards the public, he said. First the increase in the price of edible oils, then domestic gas cylinders, now the public is upset due to bringing packaged grains under the ambit of GST.

The budget of women’s kitchens has also been disturbed due to rising inflation he said adding that at the same time, traders are also opposing the imposition of GST on food grains and the central government is ignoring the voice of the people.

Former Union Minister Subodh Kant Sahai said that the Center wants to create an atmosphere of undeclared emergency in the country to implement its wrong policies but the Congress is capable of giving a befitting reply.