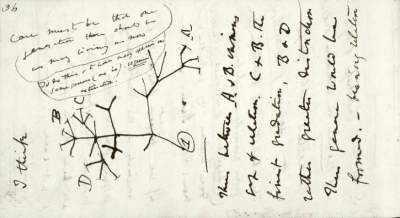 New Delhi (IANSlife) Drawing from the Charles Darwins 1837 sketch titled ‘Tree of Life’ in which he scribbled down a framework for his speculations in one of his early ‘transmutation notebooks’, a drawing project featuring 60 artists from 29 countries has been curated by Indian artist and curator Jitish Kallat. It opens Saturday.

Darwin’s intuitive drawing of an evolutionary tree is headlined by the words “I think” and is a precursor to his radical theory of evolution, common descent, differential survival and natural selection.

For the project, Kallat invites artists and audiences to consider if Darwin first wrote the words “I think” and then – when words could not capture his emergent thoughts – proceeded to draw, or if the drawing preceded the words.

As Kallat says: “The Darwinian sketch points to the core of the ruminative process – of discovery, observation and creativity – where ideas produce images and images in turn procreate ideas. This drawing is presented as the inaugural ‘prompt’ to think about the very process of drawing, as well as placing the question of ‘evolution’ (in its broadest interpretation) at the very centre of this project’s inquiry. The current pandemic has pushed us, the most dominant species on the planet, onto an exponential evolutionary change-curve as an invisible microscopic entity continues to infect our bodies and alter our life-patterns.”

Kallat adds that his “instinct was not so much to ‘curate the content’ but instead ‘curate the intent’, by letting the prompts and the ensuing dialogue with galleries and artists, produce a dynamic and self-generated organising principle; a kind of natural selection within the exhibition”.

“The idea was to reflect on the very urgency and potency of ‘drawing’ today, while holding the Darwinian sketch as a lens to reflect on our shared ancestry and common origins.” Jitish Kallat was the curator and artistic director of Kochi-Muziris Biennale 2014.

According to a statement from the organisers, the project will exist in multiple forms, with the primary manifestation being the online exhibition on www.south-south.art – a platform focussing on the Global South – from September 11 which will showcase artists’ responses to the exhibition’s prompt and also respond to the broader question: can drawing allow us to register patterns of mutations in our fast-transforming world in its many dimensions- social, ethical, political, ecological, technological and aesthetic?

The project as a whole will simultaneously branch out into the other aspects, including a series of conversations and interactive events on a Miro board.

The opening of the exhibition will have Jitish Kallat engage in dialogue with Siddhartha Mukherjee (physician, biologist and author) and William Kentridge (artist and filmmaker). The conversation will navigate some of the idiosyncratic inquiries that make up the ‘I draw, therefore I think’ project, exploring the idea of drawing as a primary unit of creativity and the gene as a fundamental unit of heredity.

For Kallat’s curatorial project, Mumbai-based gallery Chemould Prescott Road will present drawings by Mehlli Gobhai and Vivan Sundaram. On view are Gobhai’s Energy Diagrams from 1979, collages and drawings reduced to the taut interplay of line and curve, and Sundaram’s Engine Oil and Charcoal drawings created as a reaction to the First Gulf War in 1991, said the gallery.